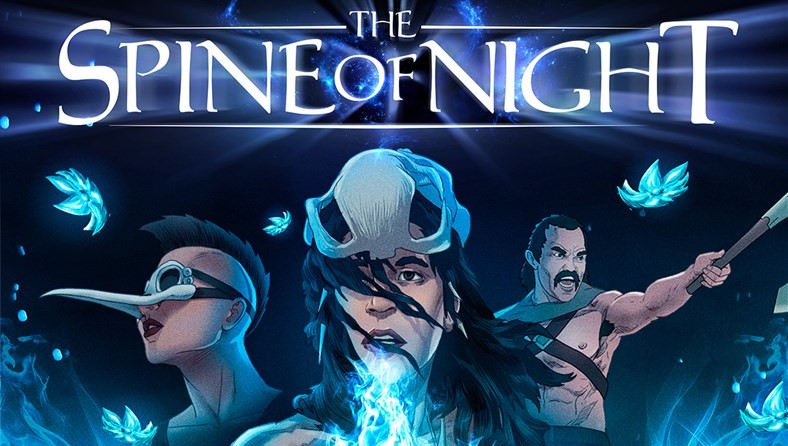 Shudder has released a hyper-violent red band trailer for its adult animated film, The Spine of Night. The trailer also revealed that the film will be available to stream on March 24th, 2022. The epic fantasy film will follow multiple characters from different eras as they fight to stop the use of a magical plant from being used for evil.

The film has a stellar voice cast that includes Richard E. Grant, Lucy Lawless, Patton Oswalt, Betty Gabriel, and Joe Manganiello. The red band trailer takes us on a peek at the odyssey film that begins in the Stone Age and as the plant travels through time we see glimpses of possession, violence, and worldwide chaos.

The Spine of the Night was written and directed by Phillip Gelatt and Morgan Galen King. Gelatt was also one of the directors that helmed multiple episodes of the hit Netflix series Love, Death, & Robots. King will be making their directorial debut but has many years as an animator under their belt. First making its premiere in 2021 at the South by Southwest festival, the film was later acquired by RLJE Films and Shudder.

“This epic fantasy tale, about the history of a land that never was, begins when an ambitious young man steals forbidden knowledge from a sacred plant. He falls to its darker temptations and in so doing, unleashes ages of suffering onto mankind. As his power grows over the years, it falls to people of different ilk and culture to attempt to stop him. Among those who stand against him are a daring tomb-robber, star-crossed lovers, a maniacal necromancer, winged assassins, and an undying guardian.”

Check out the bloody red band trailer below and be sure to check in on Shudder on March 24th when it becomes available to stream: