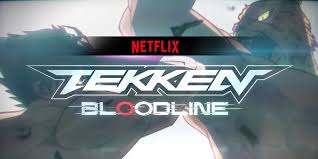 Netflix has announced a brand-new anime series that will bring characters and the universe of one of the most popular fighting games to the streaming service. The announcement was revealed via a trailer that gave us our first look at the upcoming adaptation of Tekken: Bloodline.

The new trailer features the fan-favorite character Jin Kazama who is the son of Kazuya Mishima. Training in a small village, his mother’s voice is heard telling Jin, “the first opponent you must defeat in any battle is yourself.” The demon Ogre appears at their home and these events lead Jin to seek out his grandfather Heihachi Mishima to train him so that he can get his revenge against the demon. Fans of the fighting game franchise will recognize many faces in the trailer and it seems to be taking a true take on the lore and visuals of the franchise, although not much else is known about the series at this time.

“Power is everything.” Jin Kazama learned the family self-defense arts, Kazama-Style Traditional Martial Arts, from his mother at an early age. Even so, he was powerless when a monstrous evil suddenly appeared, destroying everything dear to him, changing his life forever. Angry at himself for being unable to stop it, Jin vowed revenge and sought absolute power to exact it. His quest will lead to the ultimate battle on a global stage — The King of Iron Fist Tournament.

Having debuted in 1994 and its most recent entry in the franchise releasing in 2015’s Tekken 7, the series has always found itself in the inner conflicts of the Mishima family and the King of the Iron Fist Tournament. Although previous adaptations of the franchise have been released, one in 1998 with Tekken: The Motion Picture and in 2011 with Tekken: Blood Vengeance, Netflix has found itself a secret formula for animated adaptations of video game franchises with Castlevania and Arcane being notable successful adaptations.

There is currently no release date though the series is slated to premiere exclusively on Netflix sometime in 2022. Check out the official teaser below: