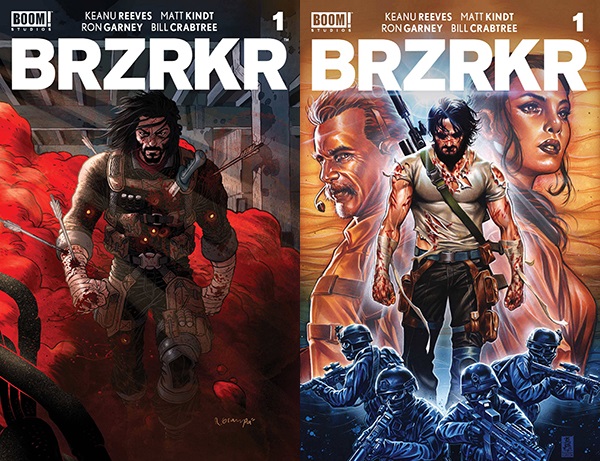 ‘BRZRKR’, the new series with illustrations from Ron Garney & Matt Kindt/Keanu Reeves’ penned a premiere issue that is as immortal as our protagonist.

The premiere issue of BRZRKR, the new series from Boom! Studios and written by the duo of Keanu Reeves and Matt Kindt is a bloody, action-packed thrill ride of mayhem and destruction. Did I mention it’s bloody? BRZRKR is one of those rare series that is created for a much broader audience as well as comic book fans. Matt Kindt, who is no stranger to providing us with some of the most adored series’ on comic book shelves, collaborates with the genius of Keanu Reeves who brings an element to the dialogue and plot that I can I imagine only he could present, plus he’s JOHN FREAKING WICK! This is the perfect storm of a creative team ladies and gentlemen, From the first page, as we are dragged through an action-filled rampage by our titular character, we are presented with a character that obviously is meant to resemble Keanu Reeves and dialogue that will resonate with fans of Reeves and will have his voice narrating this premiere issue from the first page to the last.

The titular character B, is an immortal superhuman, possibly a god, and has been for 80,000 years. Immune to death, but seems to crave it, B has amassed strength, combat experience, and a ferociousness that has formed him into the ultimate weapon. What becomes immediately clear that he has grown weary of the life he lives as mentioned in the issue, he does not wish to die, nor is he suicidal, but he does yearn for the possibility of mortality and the possibility of seeing a possible end to his life becoming a reality.

The first issue sets the tone and introduces us to many characters along with what I hope is the level of action and gore we can expect from this series moving forward. One of the first things that stood out, was Reeves and Kindt’s ability to give Garney the opportunity to tell the story through stylish art. This is something I most recently saw in DC’s ‘The Batman’s Grave’, and applaud the creative team for their creativity in telling a story with much more than dialogue. The action sequences, the gore, and graphic mutilations of all sorts will surely please fans of action comics and Garney does a beautiful job of displaying all of this and still propelling the comic forward and displaying the essence of Reeves in B, the movements, the persona, all scream KEANU in every panel.

B, the immortal weapon now working with United States Government, has agreed to hunt, kill and get the job done in exchange for the one thing he wants more than anything, mortality. With the technology of the 21st century, this might very well be possible and so, B now works with the U.S government through assignments and testing that is done on him for the possibility of what seems to be a clone army, I am sure more is to be unraveled as the series continues but this certainly raises the question, what is the price of mortality?

This series has set the bar high, not only for itself but for any comic book series in 2021. It is an absolutely fun book to enjoy, an extremely violent masterpiece. Readers will need to strap on a seatbelt for the wild ride that this team has put together. A comic book series with plenty of promise that plays out like a screenplay for Reeves’s next big action hit… FINGERS CROSSED.

Our First Hour with the Outriders Demo