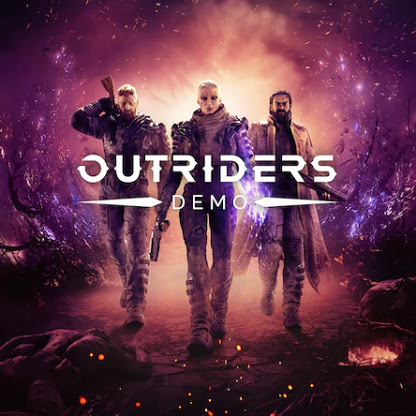 Outriders feels very much like an old-school shooter with many elements from some of the most beloved shooters in gaming history.

In Outriders: Humanity’s efforts to colonize the alien planet, Enoch, went astray as the expedition team encountered a massive energy storm, known as “The Anomaly”, during their search for a mysterious signal—which may indicate hope for humanity’s future. The storm grants both Enoch’s inhabitants and the colonists superpowers.

My favorite thing about Outriders was its ability to create a hybrid shooter with RPG elements that provide us with a mixture of brutal, and bloody combat that is frantic and energetic and one hell of a fun time.  The character customization gives RPG fas a taste of what is arguably one of the most time-consuming and addictive aspects of RPG’s, CHARACTER CREATION! Yes, you get to customize the way your character will look and sound, the devs do a great job of giving us profound options without cluttering the character customization which leads to a satisfying and simple process that does not hold you back from being able to jump into the game with a satisfying avatar. Once the game launches we are treated to a pleasant prelude of the premise of our story. The linear mission is very slow-paced, so if you’re anything like me, hang in there. We are treated to some interactions with some companions on this scout mission and truth be told, the script and characters were less than compelling. Mind you, I am a firm believer that if a game is going to adopt a multiple-choice dialogue concept, it is imperative that the main character not speak, I don’t believe anyone other than Commander Shepherd has ever provided a satisfying experience in a multiple dialog RPG platform and sadly, Outriders falls a tad short here. I say this mostly because it took about 15 minutes into the prelude for me to dislike my character, the connection between my dialogue options, and the way it was spoken just provided a disconnect and led me to slowly dislike myself more and more.

One of the key pieces that really sold me on Outriders was its combat gameplay. It borrows aspects from Mass Effect and Gears of War and most of your gunfights will rely on cover-based tactics and superpower abilities that you will gain later on in the game. The combination of gunplay with a superpower ability gives you 4 classes to choose from.

The Outriders classes are:

This Pyromancer Outriders path is built to excel at medium ranges. The Pyromancer’s skills involve setting foes ablaze and rendering them immobile, which is handy as killing enemies that you’ve marked restores your health.

For those who enjoy the assassin-role. The Trickster is all about teleporting behind bandits and doing rapid burst damage. Killing enemies close to you restore your health.

The tank of the bunch, this one excels at taking damage and keeping themselves, or their teams, alive. You’ll unlock a fortify skill early on that encases yourself in rock armor.

There really isn’t a bad class, it will all be up to your playstyle and what suits you best. The different abilities in the skill tree that allow you to experiment with the ability to place skill points and remove them to place them in another slot give you plenty of freedom to see what skill tree out of the three available will suit you the best and put you on the path to take full advantage of the cooperative loot shooter.

Outriders is not without its issues, but with the minor bugs and its minor flaws, it still provides a fun, smart loot shooter that can easily be enjoyed with friends. It holds aspects of many games that gamers have enjoyed such as Mass Effect, Gears of War, and Destiny and it gives us a brutal and bloody cover-based shooter that throws in a superpower ability and RPG style skill tree that will let us experiment on how to best provide utter chaos in this world that it has build. The dialogue lacks but, the plot certainly does not. It is full of “what the fuck” moments and provides us with a compelling plotline that definitely piques the curiosity of gamers and sci-fi fans alike. Its a simplistic approach to games like The Division and Destiny makes it more open to gamers who don’t want to put in the time grinding like some of the other titles demand and yet, we are rewarded with a game that is visually appealing, provides intriguing abilities tailored for different types of gamers and provides us with guns that are fun to use and should make for a fun game to be enjoyed with your favorite squadmates.

Enjoy our first hour with Outriders below and be sure to SUBSCRIBE to get the latest from Geek Network Entertainment.