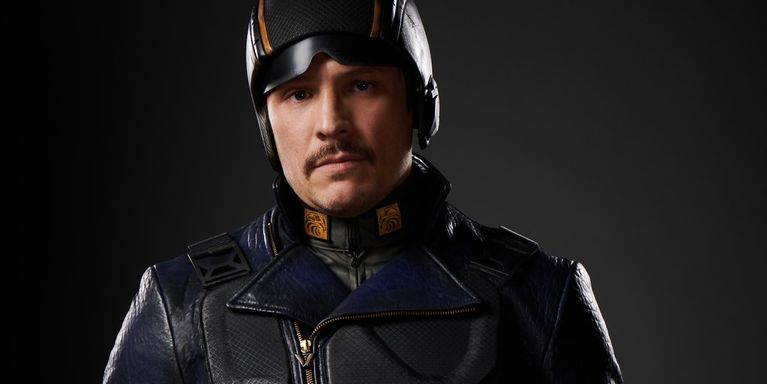 The Boys season 3 has revealed yet another look at a character that we will be meeting in the upcoming third season of the hit Amazon series. Revealed during an episode of Seven on 7, the fake news program that is hosted by the corporation Vought came with a surprising look at Nick Wechsler as Blue Hawk.

Blue Hawk is not the only super to join the ranks of season 3 as we previously got a look at Laurie Holden as Crimson Countess and Jensen Ackles as Soldier Boy. Also joining the main cast are Miles Gaston Villanueva as Supersonic and Sean Patrick Flanery as Gunpowder.

According to showrunner Eric Kripke, Season 3 will use the new heroes to explore the history of Vought International. Saying:

“Season 3’s fun because it’s not just about Soldier Boy, but it’s about the team he was a part of which is called Payback. And Laurie Holden plays Crimson Countess and there’s a bunch of other heroes who are amazing. So, sort of seeing who was the Seven before the Seven. And what was life like for Vought? In the history of Vought, what was it like in the 60s and 70s, and 80s? To dig into the history of the world, not just the present has been a lot of fun.”

The third season of The Boys currently does not have a release date, but the image of Wechsler as Blue Hawk below: