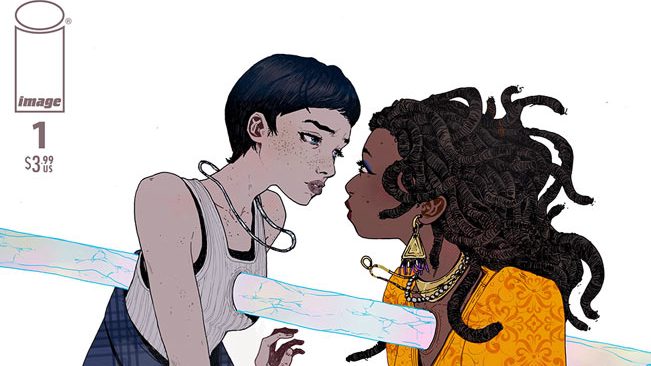 A graphic adaptation of Joe Hill’sRain will serve as the debut offering from Syzygy Publishing, Chris Ryall and Ashley Wood’s new publishing venture. This first, five issue miniseries will kick off the new line of comics, graphic novels, and art books—from the Zombies vs Robots co-creators—beginning in January 2022.

Rain first appeared in author Joe Hill’s acclaimed novella collection Strange Weather, and tells the story of a seemingly normal August day in Boulder, Colorado—the skies are clear and Honeysuckle Speck couldn’t be happier. She’s finally moving in with her girlfriend, Yolanda. But their world is literally torn apart when dark clouds roll in and release a downpour of nails—splinters of bright crystal that shred the skin of anyone not safely under cover.

Rain makes vivid this escalating apocalyptic event, as the deluge of nails spreads across the country and around the world, threatening everything young lovers Honeysuckle and Yolanda hold dear.

“You couldn’t ask for a better inaugural creative team and story with which to kick of Syzygy,” said Ryall in an exclusive on the announcement with ScreenRant. “David, Zoe, and Chris all bring such immense skill and storytelling acumen to this project, and what they’ve done with Joe Hill’s gripping story is somehow both gorgeous and terrible to behold.

“Syzygy is defined as ‘the configuration of celestial bodies in a gravitational system and the added benefit and utter thrill to me is that Image Comics is Rain’s gravitational center. We have long admired how Image has expanded and enhanced this industry, and it’s as exciting to see that ‘i’ on our cover as it is the names of the creators involved.”

Wood added, “I’m very energized to make comics with Chris and Syzygy, and to work with the many other amazing talents we have lined up makes it an even sweeter deal! Also, it’s nice to be back at Image; it’s been a while since Hellspawn with Toddy!”

As an added highlight, each issue of Rain will feature a bonus story from Unnamed, an upcoming series by Ryall and Wood following immortal hunters in pursuit of a fanged creature and set during swingin’ ’60s London.