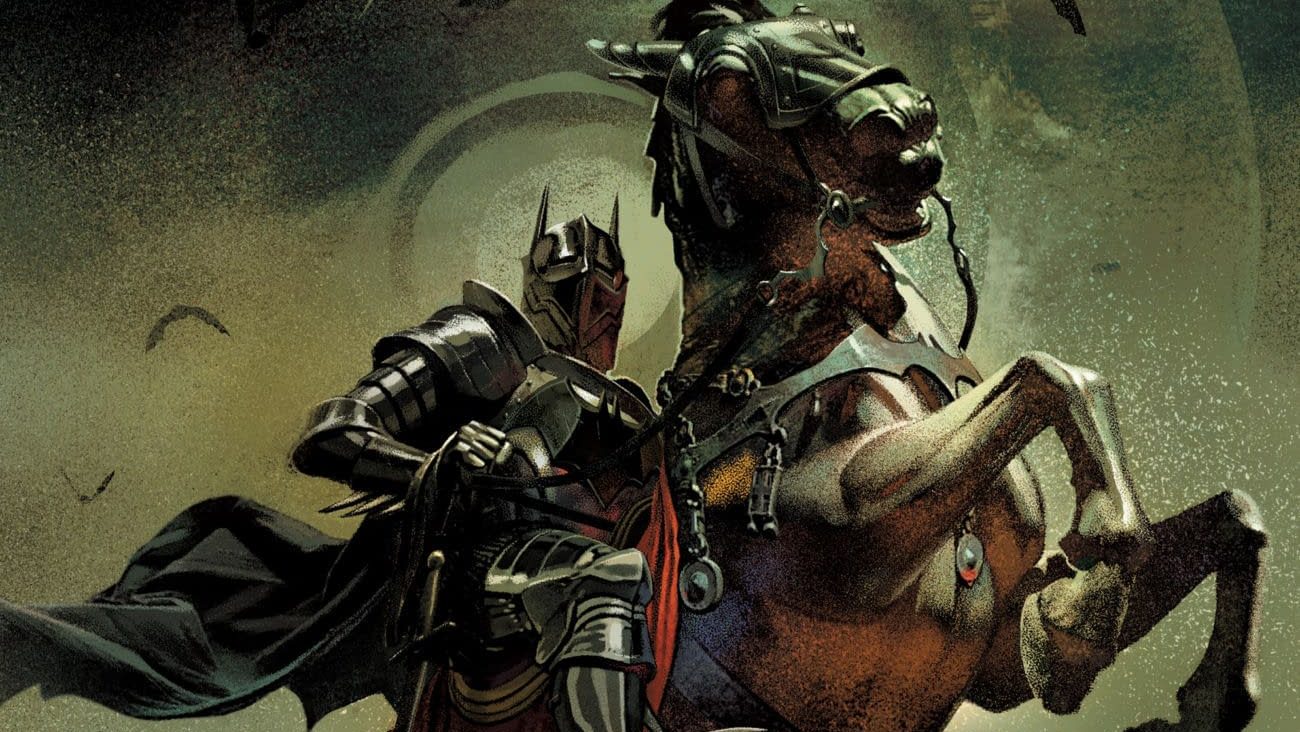 Dark Knights of Steel #1 sets the pieces of this new unique series for what’s to come in this Game of Thrones-esque mini-series. Tom Taylor does what he does best and gives us a hell of a story that’s compelling and pushes the narrative to a bar only he can surpass. It never ceases to amaze how flawlessly and effortlessly Taylor makes it seem to create these worlds and regardless of the plot points, he implements a familiarity with the twists and turns to keep readers captivated and invested from issue 1. There’s no shortage of destruction in this new series and it’s provided with much thought to where our characters are and lead to some devastation that will only grow in scale as the series goes on.

Dark Knights of Steel gives us a different origin story for Kal-El as we see Jor-EL and Lara escaping the destruction of Krypton and making it to planet Earth while Lara is still pregnant with Kal-El. The Kryptonians however do not make it to a modern-day Earth as we have seen before. Instead, they arrive in a medieval period, and before long we see them establish sovereignty. We then jump 19 years into the future as we see the new age of heroes emerging in this new universe. Kal-El now a prince shares the same traits we are familiar with as he is nearly indestructible but does have a weakness to magic. The kingdom is under the protection of the bastard prince Bruce Wayne who with his Robin knights seemingly guard the kingdom and Kal-El against any threats, but it doesn’t take long to see the conflict of how they handle these “threats” as Kal-El opposes the methods of Bruce and his father as it leads to many prisoners being possibly innocent.

With Taylor’s love to create his own universes such as DCeased and Injustice, and having done a hell of a job with these projects, he is pretty much given free rein to make of these characters what he wishes. Now, I am not saying he goes and turns Alfred into his noble steed, but he does reinvent these characters to adapt them to the time period he is working with. Batman, his Robin Knights, and Alfred are all accomplished fighters and we couldn’t forget to throw in the obvious role of jester for our beloved Harley Quinn. It sounds too on the nose, but again Taylor is the expert and it just works. His pairing with the talented Yasmine Putri who has some incredible covers under her belt in House of X/Powers of X. She completely embraces the time period and universe that was built for her and gives us some character designs that could withstand the test of time for ages. With the literal Dark Knight suit of armor and a time-accurate attire for Kal-El honoring his iconic symbol and colors.

The lettering is something worthy of being knighted as well as Wes Abbot gives us letters that look like something straight out of ancient scrolls. I say it all the time, and I will say it again. The lettering does not get the respect it deserves. It’s an art that binds the rest of the creator’s work together and it’s not an easy thing to do. My hat is off to Abbot for being able to do this while creating something true to the series premise.

Dark Knights of Steel #1 packs a tone that is perfectly captured from every angle and you will be instantly pulled into this new universe created by the team. The time period, the designs, the colors, and the letters are put together in a perfect symphony that captures the expression of this premiere issue and you will connect to it all on levels unheard of. I got to the last page and my heart wrenched as I could not wait to read more, and I expect everyone who reads this issue will also be eagerly awaiting the next issue of this epic new saga. Dark Knights of Steel #1 is forged to perfection and brings us a perfect marriage of superheroism and fantasy.

Pick up a physical copy at your local shop or head over to DC’s official site for a digital copy. To find a comic shop near you, visit comicshoplocator.com