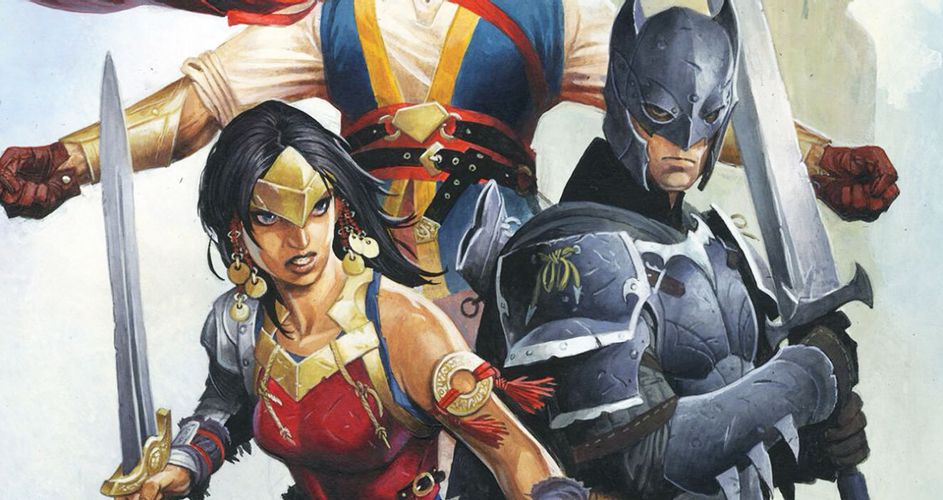 DC Clashes With Game of Thrones in New Series DARK KNIGHTS OF STEEL.

DC is launching a new medieval universe that blends with the world of superheroes. Dark Knights of Steel by Tom Taylor and Yasmine Putri places heroes like Batman, Superman, and Harley Quinn in a Game of Thrones-centric universe.

Dark Knights of Steel will put an ensemble of DC characters such as Batman, Superman, Wonder Woman, and Harley Quinn in a medieval fantasy universe.

“I’ve spent the last two years creating a new epic fantasy universe for DC Comics, and Dark Knights of Steel is an absolute dream come true,” Taylor told EW. “Despite being the writer of the DC horror series, DCeased, I’m actually a huge fantasy fan. Combining two of my favorite things, DC superheroes, and high fantasy is my absolute happy place. I grew up reading Lord of the Rings alongside Superman. Terry Pratchett alongside Garth Ennis. Robin Hobb and Mark Waid. Dragonlance and Justice League. Now I get to bring all this together with the incredible Yasmine Putri, in the biggest story I could imagine. A tale of war and love, of despair and hope, of betrayal and improbable alliances forged in battle.”

Taylor added Dark Knights of Steel will provide “all-new origins for Batman and Superman, for Harley Quinn and Black Lightning,” with the series being “for the fans of shows like Game of Thrones and Critical Role. This is for the kids who took dice to school, who chose their own adventure, and dreamed of flying in a cape.”

In 2019, Taylor gave us a taste of what he can do with an alternate universe with DC’s DCeased, which Taylor wrote with the help of the creative team made up of Trevor Hairsine, and Stefano Guadiano. In this series, The DC Universe became overrun by the Anti-Life Equation virus, which infected civilians, heroes, and villains in DC, turning them into ravaging, mindless zombies. We saw many of our favorite heroes fall including Batman, Superman, and Wonder Woman and from this we had a new generation of heroes reform the Justice League after fleeing Earth.

The success of this groundbreaking universe led to many spinoffs in A Good Day to Die, Unkillables, and Hope at World’s End. We also got a sequel series titled DCeased: Dead Planet which brought us back to this world 5 years after we saw our heroes flee Earth. In the sequel we see our heroes return to Earth return to their home planet in hopes of curing the Anti-Life Equation.

Taylor always seems to find a way to pull us into his mind and the worlds he builds and we get put through a wringer of chaos, excitement, action, and some hellishly good storytelling. Taylor’s name alone should be enough to get fans on board for this series, but even removing that, we have a twist on fantasy and the DC Universe that should appeal to many fans and I can’t wait to see where this takes us.