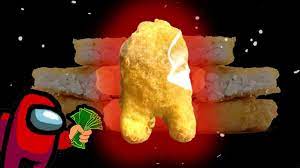 An ‘Among Us’ Chicken Nuggie Sold For Almost $100,000, because nothing makes sense anymore…

In true 2021 fashion, a chicken nugget shaped like an “Among Us” character has sold for almost $100,000. Now, it’s always been a fascination to see food shaped like certain things or people as well. A tortilla with the face of Jesus on it, done, a Dorito looks like the Pope, done! Well, the ante has been upped ladies and gentlemen as a chicken NUGGET that looks like our favorite jelly bean astronauts has sold for a ridiculous amount of money.

The seller knows as Polizna cashed in on a McDonald’s chicken nugget on eBay after noting it looked… well, sus. I won’t argue the likeness of the Among Us looking bean that it resembles, but I think the nearly 200 bidders that jumped on this listing could have made better use of the money. Who am I kidding, this is pretty damn rad and it’s a coveted prize to hold in this world. This was a pretty intense bidding war that went down and only one winner could emerge. The real question is, does it come with a side of sauce? The internet is wild y’all.