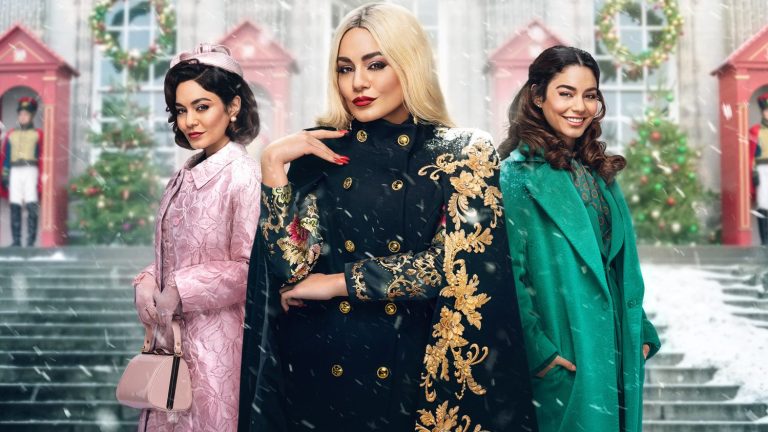 “When a priceless relic is stolen, Queen Margaret and Princess Stacy enlist the help of Margaret’s cousin Fiona teams with a man from her past to retrieve it, with romance and resulting in a very unexpected switch.”

Christmas season doesn’t start without a new installment of Netflix’s Princess Switch franchise. Vanessa Hudgens shines once again as the 3 doppelgangers Stacy, Margaret, and Fiona. The Princess Switch Romancing the Star, which is the third installment, focuses on Fiona, the high-maintenance and boujee one of the 3. This movie surprised me, mostly because I assumed that Fiona was vapid and lacked a moral code but we see quite quickly that her background has a lot to do with the walls that surround her and the personality she fronts.

If you’ve seen the first 2 movies you know not to expect too much plot-wise. The movies don’t delve too deep but that’s why they’re lovable. They’re cheesy, goofy, and meant to not make you think too much but to just relax and laugh. I laughed through this one as much as I did its predecessors. Hudgens has great chemistry with all of her co-stars which can’t be an easy feat. Playing 3 completely different women in love with 3 completely different men but they all do a great job. Hudgens does a great job differentiating between the 3 characters not only in appearance but mannerisms and accents, her accents getting much better in this movie than the first installment.

We see a different side of Fiona in this film, showing her softer and emotional side. Thus far, we’ve seen her selfishness and elitist nature but this movie humbles her a bit. The audience watches as young Fiona begs her mother not to leave her at boarding school for Christmas break. Unfortunately, she gets her selfishness from her mother because the woman just gets in a car and leaves her standing there. Fortunately for Fiona, she has a best friend, Peter, who ends up spending Christmas with her. However, we can all put ourselves in Fiona’s shoes as an 11-12 year old whose parents abandoned them at Christmas, it’s heart-breaking. It is no wonder Fiona became the person she did and no wonder she no longer talks to her mother.

The movie centers around solving the crime of the stolen Star of Peace, which Stacy and Margaret were loaned by the Vatican. They enlist the help of Fiona and Fiona enlists the help of her childhood, BFF Peter. As a group, they come up with a plan to steal it back and the plan obviously includes….switching places. The movie tends to be predictable but in a goofy way, you expect from these films. We watch Margaret, the prim and proper Queen, switch to the hilariously over-the-top Fiona. It was mildly unsettling but also hilarious because Fiona makes weird faces and keeps meowing at people throughout the movie. The surprise twist was to watch Stacy have to switch to Fiona in order for Fiona to be in 2 places at once.

If you enjoy silly and ridiculous Christmas movies that just give you a laugh then you’ll enjoy the third installment of the Princess Switch films. If you’ve seen the first two and you enjoyed those you’ll also enjoy this one. Fiona is a bit over the top and it sometimes makes you eye roll but that is the gist of her character. The charm of the original 2 movies is still prominent throughout and it’s full of cheesy lines and Christmas magic.