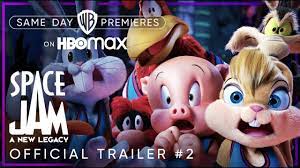 Space Jam: A New Legacy: Warner Bros. has released a new trailer for the film, and it’s packed full of new footage and story details.

Space Jam: A New Legacy: The film sees LeBron James and his son get sucked into a computer server called the “Warner 3000 entertainment ‘Server-verse.’“ It here that they find themselves on an adventure with a ton of Warner Bros. movie and TV properties.

Space Jam: A New Legacy was directed by Malcolm D. Lee (of Barbershop: The Next Cut, Girls Trip, Night School). “When LeBron and his young son Dom (Cedric Joe) are trapped in a digital space by a rogue A.I., LeBron must get them home safe by leading Bugs, Lola Bunny and the whole gang of notoriously undisciplined Looney Tunes to victory over the A.I.’s digitized champions on the court: a powered-up roster of professional basketball stars as you’ve never seen them before. It’s Tunes versus Goons in the highest-stakes challenge of his life, that will redefine LeBron’s bond with his son and shine a light on the power of being yourself. The ready-for-action Tunes destroy convention, supercharge their unique talents and surprise even ‘King’ James by playing the game their own way.”

The film is being produced by Ryan Coogler and also stars Star Trek: Discovery‘s Sonequa Martin-Green who was cast as LeBron’s wife, Don Cheadle as the rogue AI named Al-G Rhythm, Ceyair Wright who plays the older son Darius, and Harper Leigh Alexander as his daughter Xosha, and Zendaya as the voice of the character Lola Bunny. Michael Jordan is also supposed to make an appearance.