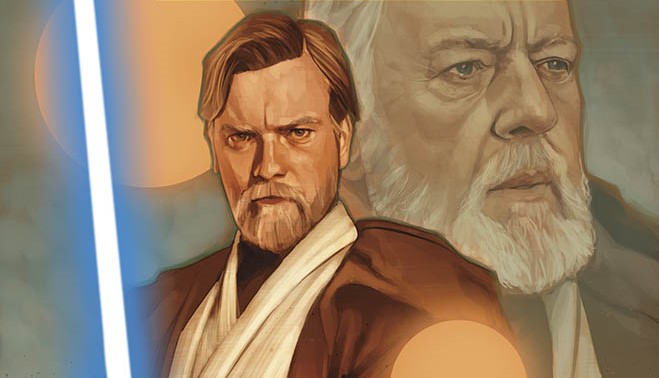 Marvel Comics has announced a new comic series coming this May that will chronicle the complete life and final days of Obi-Wan Kenobi. The limited series will be written by Christopher Cantwell and will feature art by Ario Anindito.

“The final days of his time on Tatooine, chronicling earlier adventures in his own journals (which were previously referenced in Marvel’s Star Wars series). The tales span Obi-Wan’s entire life as a guardian of peace and justice, including his days as a Jedi Initiate, Padawan missions, experiencing the Clone Wars as a Jedi Knight, and facing new threats as a Jedi Master.”

Cantwell spoke with StarWars.com about the upcoming project saying:

“What I love about Obi-Wan is that he is so much a character of patience and fortitude. He holds out hope and keeps that flame going even in the darkest times, he lost his Master, his best friend…he’s experienced a lot of grief. But he pushes forward. He waits on Tatooine for decades. He is the Buddhist concept of kshanti — patience — personified. He is able to hold onto the glimmers of light amidst the cloak of darkness. Every issue thematically deals with his ability to do that as a person.”

Cantwell confirms that we will be seeing familiar faces with legacy characters such as Yoda, Qui-Gon Jinn, Anakin Skywalker, and many more. He also shared with StarWars.com his early memories of Star Wars and how he will step away from the Star Wars fan mentality and approach the limited series in his own way, saying:

“My earliest memory is running into the dollar theater on a summer afternoon at three years old and actually seeing the very end of Return of the Jedi first (with the three ghosts at the Ewok party) because I was so excited to watch the movie. I had a VHS tape of A New Hope that my parents recorded from when CBS aired it for the first time on TV in 1984. I wore it out. I have the commercials for Nature Valley Chewy Bars and Kit Kat bars memorized just as much as all the dialogue. But I had to put ALL that down when crafting this story.

And when it came to Obi-Wan at this age…I looked to my own eight-year-old son. I love seeing the world through his eyes because it reminds me of what it was like when I was his age. I very much tried to tap into that. There’s this idea in the first issue of being small in a massive universe. Every kid feels that way. I also wanted to make sure I got all the details right…and there are LOT of details to get right when it comes to Star Wars.”

With the upcoming Obi-Wan Kenobi live-action series premiering on Disney+ this year as well, we are not sure which will arrive first as we don’t have a confirmed release date for the limited series, but regardless, this should be a great recounting of the bearded Jedi Master for all fans to enjoy.

Obi-Wan Kenobi #1 will be available at your favorite comic book shop and digitally this May. Check out the covers for issue #1 below from Phil Noto, E.M. Gist, and Peach Momoko: