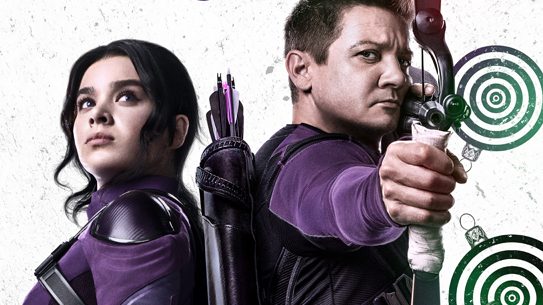 Marvel Studios has revealed a new Hawkeye poster giving us our freshest look at Clint Barton and Kate Bishop in full costume for the upcoming Marvel Cinematic series coming to Disney+. Jeremy Renner and Hailee Steinfeld will lead the series as the former Avenger takes on a new protégé being trained to take over the mantle. After all, Clint has earned a much-needed vacation or even retirement.

Hawkeye will pick up after the events of Avengers: Endgame as Clint and his family go to New York City for some holiday fun. However, the vacation hits a snag when enemies of Clint during his time as Ronin come after him and this leads Clint to team up with his Hawkeye superfan Kate Bishop to take down these new foes and still be home in time for Christmas. The series is just two weeks away and Marvel Studios wants to make sure you don’t forget it as they released this killer new poster which you can see in its full glory below: