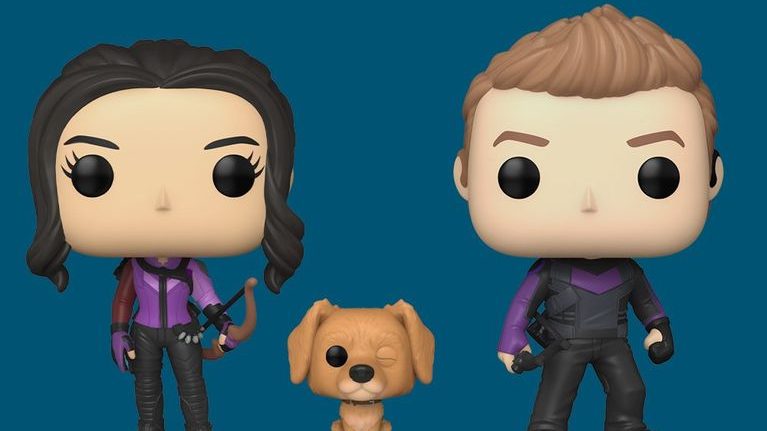 With Hawkeye‘s premiere last week, fans have been buzzing over the new Disney+ series and the stellar performances from the cast so far. That includes Lucky the Pizza Dog who is the best doggo. Well, it should be no surprise that along with the series comes a line of new Hawkeye Funko Pop! Figures that will be arriving soon. Funko just made the announcement of the first three figures that includes Kate Bishop who is portrayed by Hailee Steinfeld, Clint Barton who is portrayed by Jeremy Renner, and the lovable Lucky the Pizza Dog!

With Clint rocking his most comic-accurate outfit that we are bound to see in the Disney+ series soon is crazy accurate to the series all the way down to the hearing aid. If that doesn’t do it for you then maybe this Kate Bishop and Lucky bundle will be enough to break open your wallet this holiday season as we see Steinfeld’s character in her black and purple outfit and they make sure to include Lucky the Pizza Dog to make sure we do not even consider passing up on this figure. With other notable characters on the horizon with the new series, such as Echo who will be portrayed by Alaqua Cox, and Yelena portrayed by Florence Pugh set to make an appearance, we are sure to get plenty of other figures from the series to add to the collection.

You can preorder these new Funko figures here