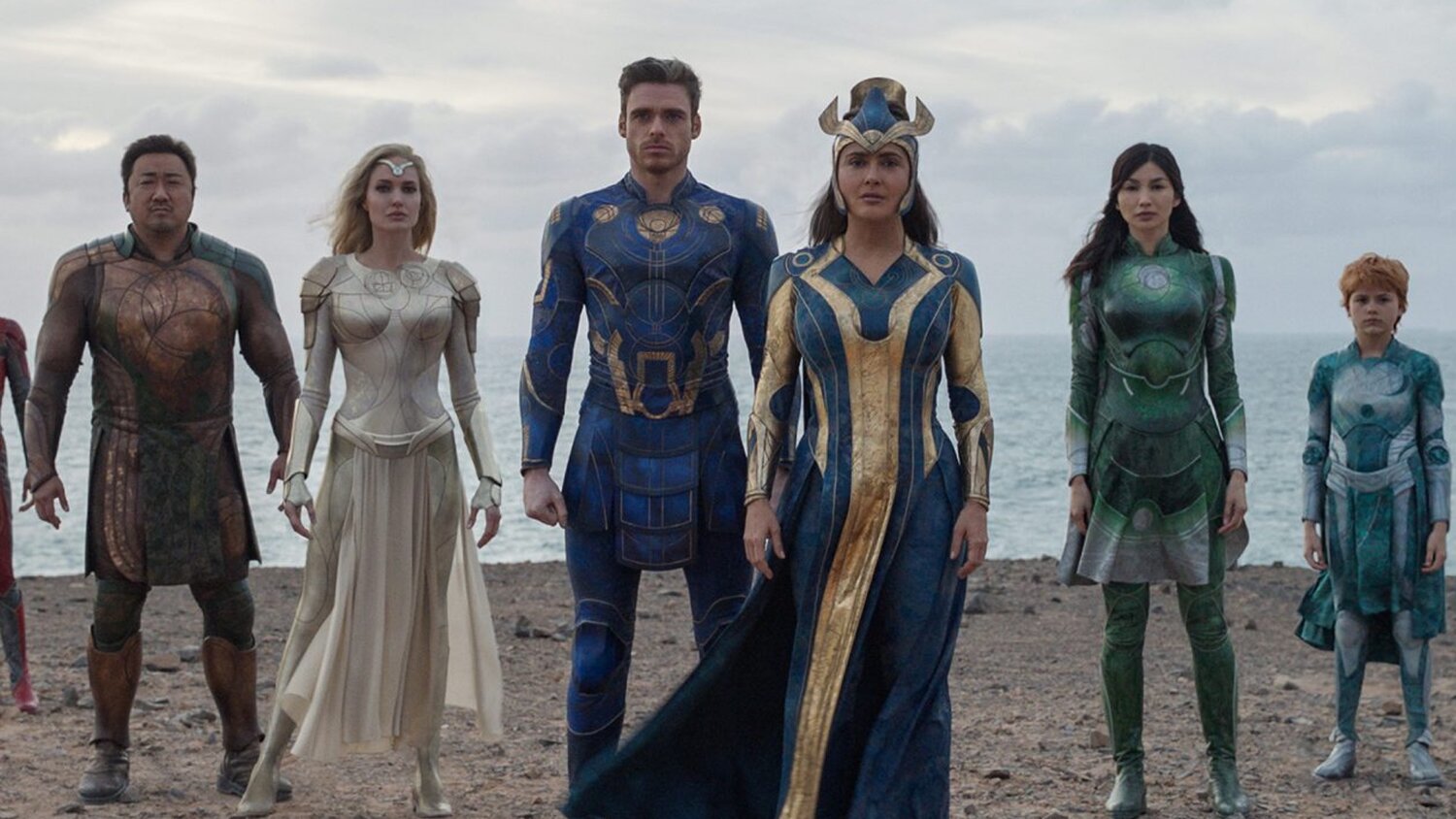 Entertainment Weekly has shared some new close-up character photos and information to share with you for Marvel’s Eternals. The new images that were shared come in the form of EW magazine covers and there are also interviews with members of the cast and crew offering some insight on the film.

Eternals features “an exciting new team of Super-Heroes in the Marvel Cinematic Universe, ancient aliens who have been living on Earth in secret for thousands of years. Following the events of Avengers: Endgame, an unexpected tragedy forces them out of the shadows to reunite against mankind’s most ancient enemy, The Deviants.”

In the comics, The Eternals were sent to Earth 35,000 years ago by the Celestials to protect humankind from the Deviants. Zhao previously explained, “It’s about this group of incredible immortals, but through their journey, we really get to explore what it means to be human and humanity on our time on this planet.”

EW shares that Zhao leaned heavily on Jack Kirby’s original comics and style, “both for visual inspiration and for their grand sense of storytelling.” It’s also said that she “loved the idea of treating the Earth itself as an 11th character in the film, following its journey throughout the centuries.” She explained:

“I thought, I can go as big and as epic as our meaning in the cosmos, but I can also go intimate and explore all of the internal struggles we have as human beings. Because these characters have lived among us for so long, [they have] the same struggles like identity, purpose, faith, personal freedom versus greater good — all the duality and flaws that make us human.”

Marvel Studios President Kevin Feige went on to talk about bringing Zhao onto the project and how well-versed she actually is with comic books:

“The truth is, we would not have even attempted [Eternals] if it weren’t for Chloé. We thought, here’s a filmmaker who is equal parts cinematic visionary and genre nerd. She can outtalk any of us when it comes to manga and Star Wars and Marvel comics. It’s quite an astounding combination. And this movie, I think, represents all of the immense multitudes of Chloé.”

The movie is described as “…largely a standalone story, focusing specifically on these 10 characters and their journeys together,” and since the film takes place after the events of Avengers: Endgame, Eternals will offer an explanation of why these ancient heroes didn’t step in to help the universe or help tackle any of the other various crises throughout history.

The short answer is that “their mission is to focus on the Deviants and never interfere with human affairs.” It’s also said that the story will have “major ripple effects on future stories”, and it’s explained that it “was a challenge at times to balance the MCU’s more grounded tone with the mythic grandeur of Eternals.”

This film is set to blow True Believers away and I cannot wait for this film!

You can check out the character images below. The movie stars Richard Madden as the all-powerful Ikaris, Gemma Chan as humankind-loving Sersi, Kumail Nanjiani as cosmic-powered Kingo, Lauren Ridloff as the super-fast Makkari, Brian Tyree Henry as the intelligent inventor Phastos, Salma Hayek as the wise and spiritual leader Ajak, Lia McHugh as the eternally young, old-soul Sprite, Don Lee as the powerful Gilgamesh, Barry Keoghan as aloof loner Druig, Angelina Jolie as the fierce warrior Thena, and Kit Harington plays Dane Whitman.

Meet Sersi, who has a soft spot for humans. @gemma_chan and @TheEternals cast assemble, introducing Marvel's family of immortals to protect mankind from their oldest enemy. https://bit.ly/3k1DdTz Story by @devancoggan

Meet the all-powerful Ikaris. @_richardmadden and his #Eternals costars bring a race of immortals to the MCU in a thrilling new adventure. Go behind the scenes: https://bit.ly/3k1DdTz Story by @devancoggan

Meet the forever young Sprite. Lia McHugh and her #Eternals costars usher in an ageless, superpowered new group dedicated to protecting humankind in the MCU.

Meet the speedster Makkari. @LaurenRidloff, the MCU’s first deaf hero, and her #Eternals costars introduce a powerful family of immortals in Marvel’s next big adventure.

Meet the aloof Druig. @BarryKeoghan and @TheEternals cast come together for a cosmic, millennia-spanning epic that might be Marvel's most ambitious film so far.

Meet the warrior Thena. Angelina Jolie and her #Eternals costars introduce a new Marvel super team in a sprawling saga about immortals keeping watch over humanity.