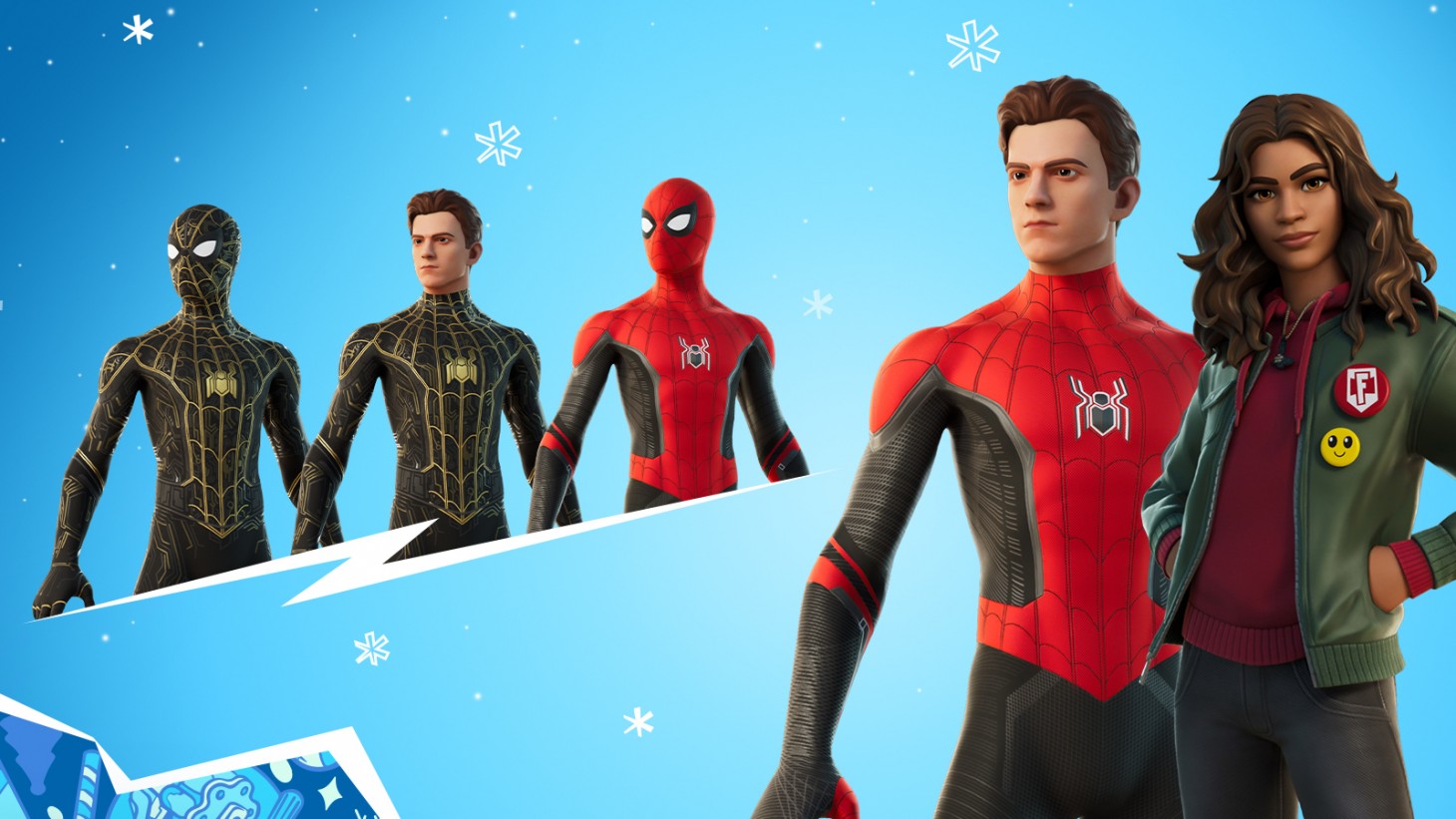 Epic Games announced that the Fortnite 2021 Winterfest is now live and with it, we will see Spider-Man and MJ from No Way Home joining the item shop when it updates later today. With the MCU characters joining the store, it will also bring in Tom Holland‘s No Way Home suit and his Black and Gold Suit and an emote that will let you remove Spider-Man’s mask.

Along with the skins joining the store today, the 2021 Winterfest will run until January 6th, 2022, and will let players earn up to fourteen rewards from Sgt. Winter including three skins.

“Crackshot’s handing Sgt. Winter the keys to the Winterfest Lodge, where Sgt. Winter will be giving presents to players, unwrap a new present at the lodge every day for 14 days. Wrapped up in the lodge are two outfits, two pickaxes, two wraps, as well as a glider, contrail, emote, lobby track, loading screen, emoticon, spray, and banner.”

Here’s a look at two of the outfits: Krisabelle, a festive take on the community-inspired Isabella, and Polar Peeley, a wintery take on the banana skin. You can unwrap the Krisabelle outfit after unwrapping the six presents obstructing her, and you can unwrap Polar Peely after his giftbox thaws.

You can reach the Winterfest Lodge by accessing the snowflake tab in the Lobby. If you miss a day of presents, simply head back to the lodge before the Winterfest event ends on January 6, 2022.

Of course, as is the case with all Fortnite events, there are also quests for players to complete during the 2021 Winterfest event. Every day for the next fourteen days, Sft. WInter will announce a new quest on the “Quests” page to give players a chance to gain some XP. If you manage to complete seven of the quests, you will have earned yourself the Snowmando Board Glider, if you complete ten quests, you will get the Frosty Back Bling. If you are a Fortnite Crew Member, you will receive the Golden Look Board Glider when you log in. Check them out below:

If this isn’t enough to convince you well there is still more! For players who jump into the featured creations in the Winterfest tab and play two hours of creator-made maps and games, you will get the Ol’ Cracky Emoticon, Llamistletoe Spray, the Merry Marauder Banner, and the 2022 New Year’s Banner.

And finally, we have some fan-favorite items returning to the game for the 2021 Winterfest as the Chiller Grenades, Snowball Launchers, Holiday Presents, and the Sneaky Snowman Disguise.