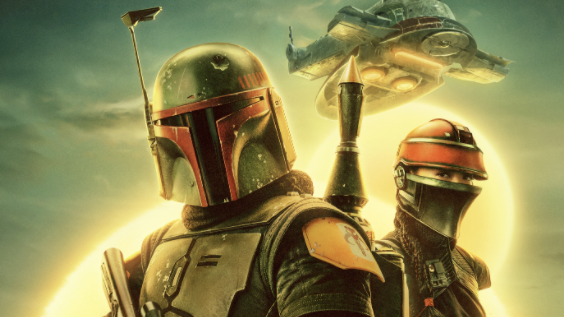 Disney and Lucasfilm have released the first trailer for The Book of Boba Fett, the new live-action spinoff series set in the Star Wars universe is set to premiere on Disney+. Boba Fett has been a long-beloved character in the Star Wars universe since the original trilogy and most recently made his grand return in The Mandalorian as he helped Mando and Grogu on their journey. Now, he is set to go off on his own adventure and the notorious bounty hunter has found a new calling as the new crime boss in town.

In the trailer, we see Boba and Fennec making their mark after ending Jabba’s reign. It seems as they are looking to step into the role of the new crime bosses, but of course, it won’t come without conflict. Boba and Fennec had great chemistry during their time in The Mandalorian and I am super stoked to see the pair continue their journey together in a way that is true to their characters. They are not heroes or villains. They have a code and live their lives in a gray area of morality and it will be great to see that explored further.

The synopsis for the series reads:

“The Book of Boba Fett,” a thrilling Star Wars adventure teased in a surprise end-credit sequence following the Season 2 finale of “The Mandalorian,” finds legendary bounty hunter Boba Fett and mercenary Fennec Shand navigating the galaxy’s underworld when they return to the sands of Tatooine to stake their claim on the territory once ruled by Jabba the Hutt and his crime syndicate.”

The Book of Boba Fett is directed by Robert Rodriguez, Jon Favreau, Bryce Dallas Howard, and Dave Filoni. Much like The Mandalorian, the duties behind the camera are shared among some of the artists that helmed episodes of The Mandalorian to bring their own flair to the series. Dean Cundey will serve as director of photography for the series. Favreau, Filoni, Rodriguez, Kathleen Kennedy, and Colin Wilson served as executive producers. Karen Gilchrist and Carrie Beck serve as co-executive producers, with John Bartnicki producing and John Hampian as co-producer.

The series has Temuera Morrison returning in the iconic role of Boba Fett starring alongside Ming-Na Wen who is reprising her role of Fennec Shand that she portrayed in The Mandalorian.

The Book of Boba Fett premieres exclusively on Disney+ on December 29th, 2021. Check out the trailer and new poster below: