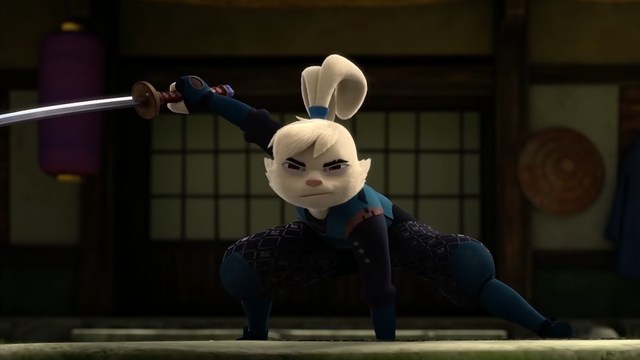 The new series is based on Stan Sakai’s Usagi Yojimbo comic.

Netflix and Gaumont Animation gave fans a first look at Samurai Rabbit: The Usagi Chronicles, a new series that is based on Stan Sakai‘s Usagi Yojimbo comic.

You may know Miyamoto Usagi, the samurai rabbit, from his long standing connection to the Teenage Mutant Ninja Turtles. Usagi has crossed over in three of their animated series, but Netflix and Gaumont announced last year that this is the first time that Usagi will get his own solo debut.

Samurai Rabbit The Usagi Chronicles follows Yuichi Usagi, an adventure-loving samurai-in-training on his quest to rid Neo Edo of the dangerous Yoki. He and his trusted tokage, Spot, journey through a lush alternate version 26th century Japan that mixes sci-fi technology with Edo period Japanese design with anthropomorphic animals. Along the way, he’ll team up with the brash rhino bounty hunter Gen, the fun loving fox thief Kitsune, and the serious cat ninja Chizo in this animated action comedy. All the characters are descendants of the classic heroes of Usagi Yojimbo.

Many of the characters Yuichi befriends during the show are also descendants of classic heroes from Usagi Yojimbo, including the brash rhino bounty hunter Gen, fun loving fox thief Kitsune, and serious cat ninja Chizo.

Aquaman and Furious 7’s James Wan is serving as executive producer for the show, and he was an avid fan of the comic growing up.

Sakai himself has been very protective of this comic, which he considers his life’s work, and the crossovers with the Teenage Mutant Ninja Turtles were more of a “testament to Sakai’s personal friendship with the Turtles’ creators, Peter Laird and Kevin Eastman.”

During the panel, Sakai shared that he has been very involved in every stage of the project and has given input and approval for everything in the finished product from design to voice actors. Above all, he wanted a show that would be action packed, well crafted and respectful of Japanese culture. His passion for the project is a great sign of quality from a cartoonist who won an Inkpot Award for “Lifetime Achievement in the Field of Cartooning,” and has been inducted into the Eisner Award Hall of Fame. Nearly 40 years after his first Usagi Yojimbo story, Sakai’s series is still garnering Eisner nominations.

Samurai Rabbit: The Usagi Chronicles’ showrunners, Doug & Candie Langdale, said they wanted to build a character-driven story that appealed to the young audience that devoured Teenage Mutant Ninja Turtles back in the ’80s and ’90s. Lead Director Ben Jones compared the series to the Hong Kong action comedies of Jackie Chan and Stephen Chow, mixing light-hearted action with technical precision. For his part, Art Director Khang Le wanted to bring the iconic look of the comic to life, by giving Neo Edo a mix of traditional Japanese architecture and the vertically inclined and vibrant buildings of modern Tokyo. It was that wonderful fusion that apparently sold Sakai on the series.

There is no release date as yet for the series, which will premiere on Netflix.