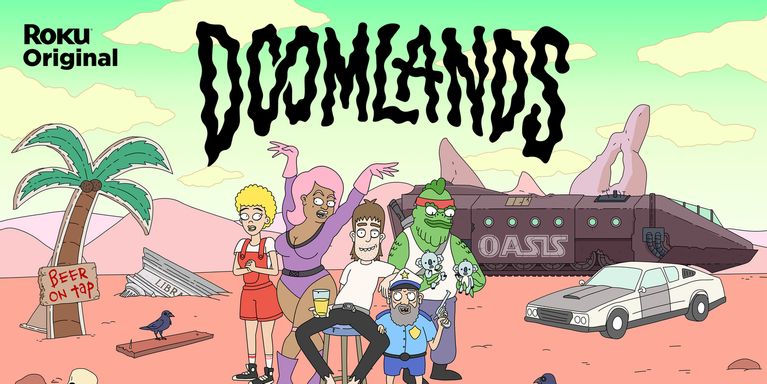 Roku recently announced that they would be bringing us a biopic based on the Grammy Award-winning musician Weird Al Yankovic starring Daniel Radcliffe as Yankovic. Roku is continuing its stride towards adding original projects to its slate of releases as it announced that the adult animated TV series Doomlands is coming to their channel.

The series will follow a mobile pub called The Oasis, the bar on wheels crosses the wastelands in a post-apocalyptic world serving unusual patrons they come across. On board The Oasis we find Danny Doom who is voiced by Mark Little and his friend and bartender Lhandi who is voiced by Kayla Lorette. The duo faces the challenges of this eccentric post-apocalyptic world and its inhabitants as they come across different challenges, both big and small.

There isn’t much more information on the animated series, but there are a few images that give us a tease at some of the characters we will meet when the series premieres. There will be different characters ranging from beasts to robots and many curious characters in between including a koala with an eyepatch!

The series was created by Josh O’Keefe who began the development of the series as a film project that blossomed into a full-fledged series about a crowd-funded pilot. Talking about his inspirations for creating the series, O’Keefe said that “Doomlands is a post-apocalyptic animated comedy soaked in dust, beer, and blood” and that the series is “an homage to Ozploitation and Sci-Fi cinema.”

The series then landed with executive producer Josh Bowen from Look Mom! Productions who helped O’Keefe bring the series to life on Roku.

Bowen described the series as:

“Doomlands is Mad Max meets Cheers in the Mos Eisley Cantina, which is a major part of what originally attracted us to the concept. This project was produced almost entirely throughout the pandemic. In fact, Josh literally produced this show from my mom’s basement with the help of her home-cooked meals. The final product is a testament to the resilience and adaptability of our team, and we’re so excited that it’s now a Roku Original.”

Doomlands will be available exclusively for free on The Roku Channel on January 28.