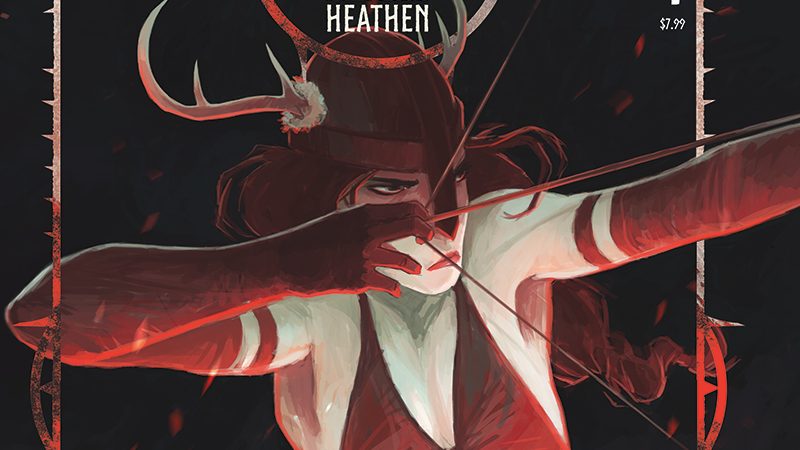 Created by Natasha Alterici, this international best-seller was selected as an American Library Association YALSA 2018 Great Graphic Novel For Teens, has seen more than 30 printings and is available in 36 countries around the world.

HEATHEN centers on the warrior Aydis, an outcast gay woman born into a time of warfare, suffering, and subjugation of women. She is on a mission to end the oppressive reign of the god-king Odin.

HEATHEN is currently in development for a feature film by Constantin Film and Prime Universe Films, with“Twilight” director Catherine Hardwicke attached to direct.

HEATHEN creator Natasha Alterici is a writer and artist living in Tulsa, Oklahoma who has been working as a freelance artist for pver ten years. Works include HEATHEN, Dinosaur Project, Gotham Academy: Yearbook, Grayson Annual, The Lez Film Review, Mixed Signals, Lovers and Other Strangers, Transcience and a number of others.

HEATHEN: VAULT RESERVE EDITION #1 hits store shelves on February 16th, 2022. The full synopsis can be read below: The book that started it all…Natasha Alterici’s HEATHEN returns to single issue format for our 5th anniversary to launch Vault Reserve, the definitive collector’s edition – featuring new and rare covers, as well as exclusive backmatter.Aydis is a viking, a warrior, an outcast, and a self-proclaimed heathen. Aydis is friend to the talking horse Saga, rescuer of the immortal Valkyrie Brynhild, and battler of fantastic monsters. Aydis is a woman. Born into a time of warfare, suffering, and subjugation of women, she is on a mission to end the oppressive reign of the god-king Odin.