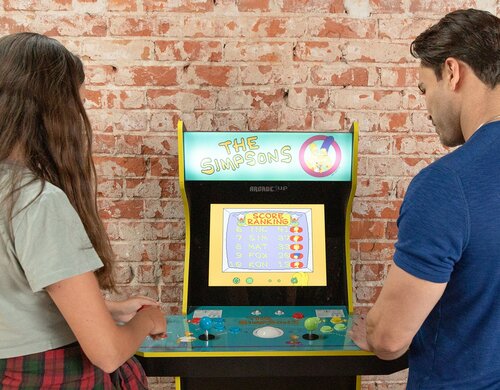 The Simpsons arcade: Classic arcade game ‘The Simpsons’ from Konami getting a cabinet release from Arcade1Up.

The Simpsons arcade: Arcade1Up has announced a ¾ scale arcade cabinet for The Simpsons that allows you to relive your fun in a more authentic way than just sitting on your couch.

It’s the first family of animated comedy, in a home arcade form factor! Originally released in arcades by Konami in 1991, this Homer-sized smash hit (well, even way, way bigger than that) has been clamored for by Arcade1Up fans since Day 1, and now The SimpsonsTM are here!

“Don’t have a cow man!,” we’re getting to the gameplay! Exactly how you remembered it in the early ‘90s, play as Homer, Marge, Bart, and Lisa, taking on swarms of Springfield’s wide cast of inventively ludicrous characters. Four simultaneous players, endless animation inspired fun.

As an added bonus, fans will find a second game that will be announced later this summer on the machine as well. Fans can purchase their copy of the cabinet from GameStop, Walmart, and The Brick Canada for $599.99. This comes with Wi-Fi, a lit marquee, a matching riser, an exclusive stool, a clear deck protector, and an 18” x 24” tin sign.