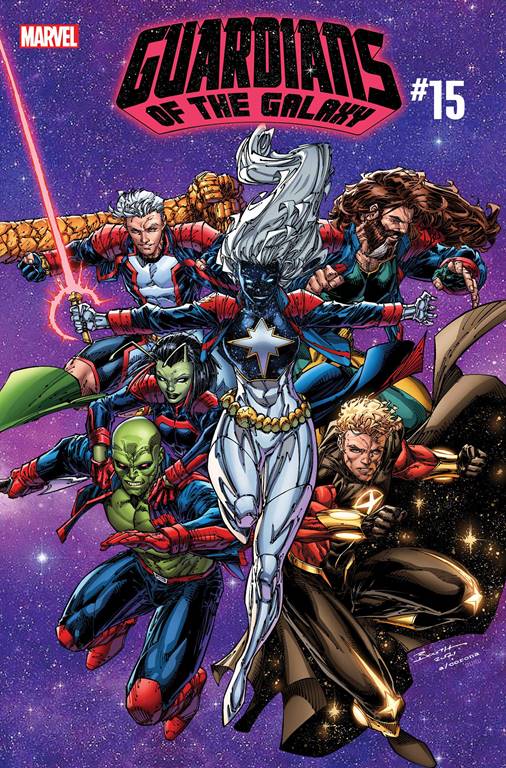 Get a sneak peek at Al Ewing and Juan Frigeri’s next explosive issue of GUARDIANS OF THE GALAXY, on sale June 23rd!

Marvel’s new age of space kicks it into high gear this summer in THE LAST ANNIHILATION, a new crossover spinning out of GUARDIANS OF GALAXY! Known for his long-term world building and big payoffs, acclaimed writer Al Ewing continues to revolutionize Marvel’s cosmic landscape. All the pieces are now in place for a conflict that will shake the stars and test the very limits of the galaxy’s mightiest heroes.

THE LAST ANNIHILATION will begin in July’s GUARDIANS OF THE GALAXY #16 but the mastermind behind this latest threat has been kept under wraps. However, fans won’t have to wait long! After months of speculation, fans will finally learn the identity of the saga’s secret villain next month in GUARDIANS OF THE GALAXY #15. The issue will deliver an ending no one will see coming and will also see two heavyweights from Ewing’s current titles collide. Both reeling from recent conflicts, the new Guardians of the Galaxy will come face to face with mutantkind’s new space agency, S.W.O.R.D. Get a glimpse at the Guardians’ tense showdown with the master of magnetism, Magneto, in all-new never-before-seen artwork by series artist Juan Frigeri!

“GUARDIANS OF THE GALAXY and S.W.O.R.D. have been building their own unique gravity for a while now, and in space, when two objects have gravity, there’s a pretty good chance they’ll crash into each other – or get sucked into the orbit of something even bigger,” Ewing said. “Marvel Space these days is a fragile coalition of worlds that chose peace over war, a little bubble of hope in a cruel void – but there’s an enemy nobody ever suspected readying an attack that’ll either cement all those frail alliances or tear them to pieces.”

In recent issues, the Guardians of the Galaxy have increased their ranks like never before, recruiting powerhouses such as Wiccan, Hulkling, the original Quasar, and even Doctor Doom! But will they all be enough to withstand what’s to come? Pick up GUARDIANS OF THE GALAXY #15 to discover what villain is behind THE LAST ANNIHILATION and to see the twisted vision they have in store for the galaxy. And stay tuned for more information on this epic cosmic crossover, including the full revealed cover of GUARDIANS OF THE GALAXY #16! For more information, visit Marvel.com.