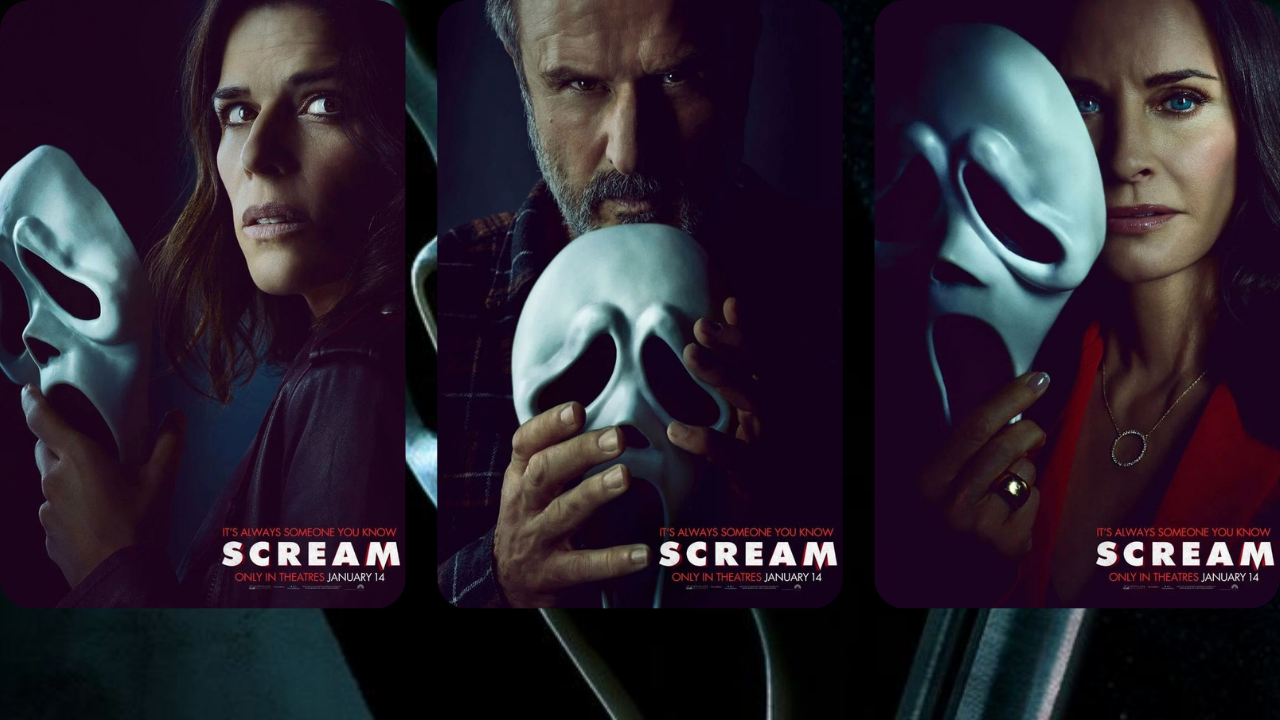 New character posters for Scream 5 have been released that feature original franchise stars Sidney, Dewey, and Gale holding the infamous Ghostface killer’s mask. The fifth installment in the slasher movie franchise was originally brought to life by Wes Craven and Kevin Williamson in 1996. Neve Campbell, David Arquette, and Courtney Cox have starred in all 5 installments and are set to jump back into the insanity of Ghostface once again.

The franchise brought life to the slasher genre and has since followed the rules of slasher films fanatically, with the most important one being that there is always being that the killer always returns for a sequel and has since spawned a total of four entries in the franchise with a fifth set to arrive in 2022. Now, we see the original and remaining stars set to join a new era of characters as the killer returns once again, but do these posters point to one of them breaking and possibly being the killer? That would be too easy, it certainly always has us on edge trying to figure out who is behind the mask, and could this be the end of the legacy for Campbell, Arquette, and Cox?

Whether the torch is being passed on to a new generation of victims, the focus remains on the original cast in these posters and points to either some hidden meaning behind these images or just the fact that they cannot seem to escape the nightmare they entered in the first film.

The upcoming film will pick up 25 years after the original murders in Woodsboro. A new killer has emerged and dons the iconic Ghostface mask to target and murder a group of teenagers in hopes of resurrecting secrets in the town’s deadly past. Starring alongside the original characters is Jenna Ortega, Dylan Minnette, Melissa Barrera, Jack Quaid, Marley Shelton, Kyle Gallner, Mason Gooding, Mikey Madison, Jasmin Savoy Brown, and Sonia Ben Ammar.

Self-proclaimed Scream fans, Matt Bettinelli-Olpin and Tyler Gillett will helm the film, taking the torch from Wes Craven. The film was penned by James Vanderbilt and Guy Busick and produced by William Sherak, Vanderbilt, and Paul Neinstein. Scream 5 slashes into theaters on January 14th, 2022. Check out the posters below: