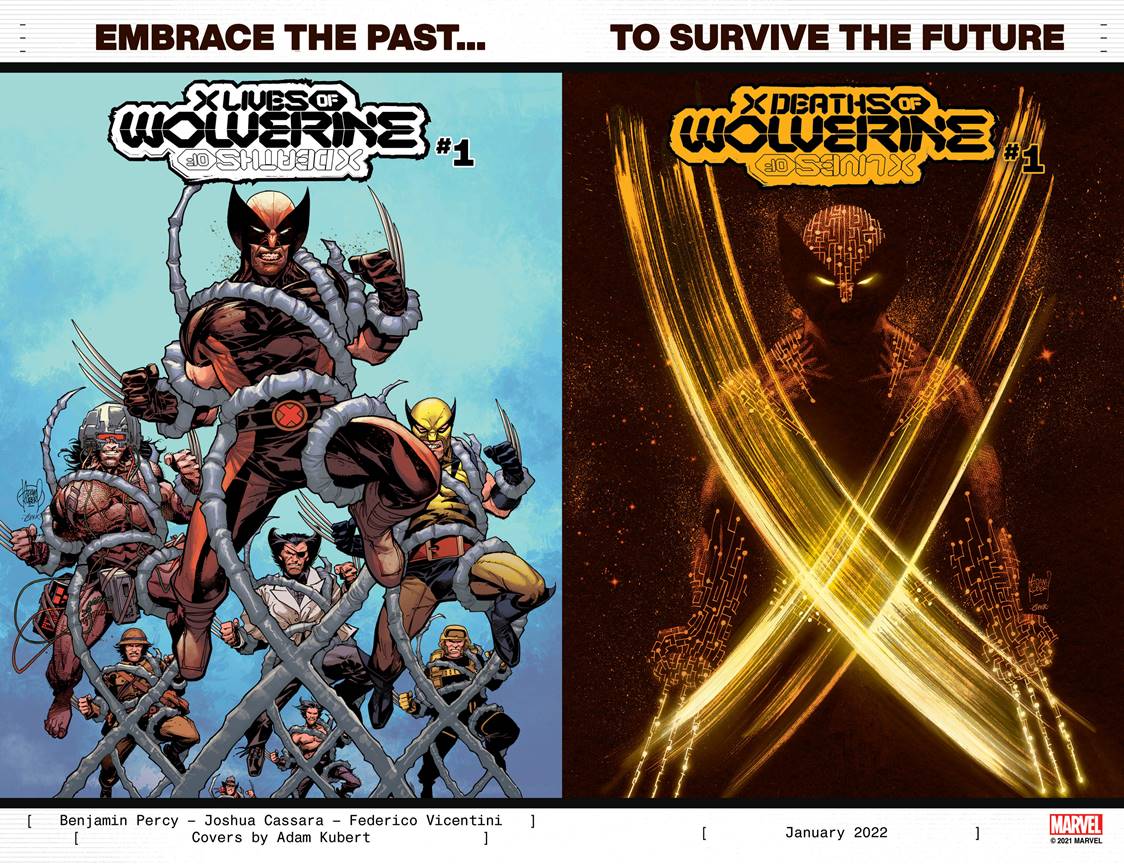 Past Meets Future In X LIVES OF WOLVERINE And X DEATHS OF WOLVERINE – Benjamin Percy, Joshua Cassara, Federico Vicentini, and Adam Kubert launch the biggest Wolverine story of all time this January

Past and future will collide in Benjamin Percy’s X LIVES OF WOLVERINE and X DEATHS OF WOLVERINE, two interlocking new X-Men series debuting this January. In the same way, Jonathan Hickman’s HOUSE OF X and POWERS OF X transformed the mutant mythos in 2019, these twin series will usher in The Second Krakoan Age of X-Men, releasing on an alternate weekly schedule, starting with X LIVES OF WOLVERINE #1 on January 5. Having been the character’s chief storyteller for the past few years across media including scripted Marvel podcasts, X-FORCE, and WOLVERINE’s current ongoing series, Percy is ready to tell the next Wolverine milestone alongside Marvel Stormbreaker Joshua Cassara and kinetic artist Federico Vicentini. With covers by legendary Wolverine artist Adam Kubert, X LIVES OF WOLVERINE and X DEATHS OF WOLVERINE will kickstart the new year with bold revelations and exciting developments not just for Logan but for all of mutantkind.

Logan. James Howlett. Weapon X. The mutant best known as Wolverine has lived many lives under many identities and in many places, but never before has the fate of the future been so entwined with the past! Fan-favorite eras of Wolverine’s saga are explored anew, along with never-before-seen episodes as Logan must travel to various points in time to prevent the death of a key figure in mutant history. But these lives are only one side of the story… If Wolverine’s future lies in the past, what does that mean for the present?

No one is safe. The future is at stake. The only certainty in life is DEATH and WOLVERINE.

Be here for the start of this epic tale across all of Wolverine’s history and future yet to come when X LIVES OF WOLVERINE and X DEATHS OF WOLVERINE begin in January! For more information, visit Marvel.com.

CHERNOBYLITE REVIEW: The Weight Of Your Decisions Is Your Only Companion In This Desolate Wasteland