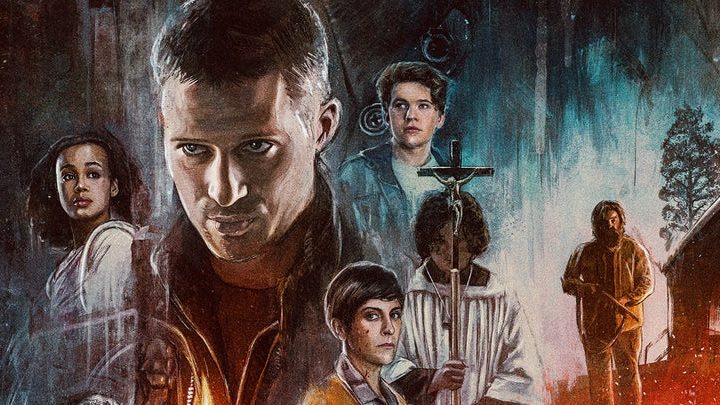 Creator Mike Flanagan has delved into the slow and methodical brand of horror that we have come to enjoy from his work. Both Hill House and Bly Manor follow the vein of what we get in Netflix’s Midnight Mass. It is a slow burn that is carefully woven together with scares and underlying fear as Flanagan unravels the intricate story he has built. It all maintains focus as each episode pieces together another piece of the puzzle. The difference here, is that instead of the microscope being on a singular family, Flanagan takes his formula and targets a small fishing village and while it maintains the same build up and focuses on the same dynamics, the scope is widened and we have moved on from the tales of ghosts to the gruesome horror of monsters.

Midnight Mass takes place in the community of Crockett Island, or as it is referred to as the “Crock Pot.” It is a small and isolated community of a decaying town and this is truly where the series shines. As Flanagan does best, we are introduced to a variety of “colorful” personalities in these characters, One being Riley Flynn (Zach Gilford), who has returned to his childhood home after having spent a long absence due to an accident and the repercussions that followed. He is a character that is both reserved, but Gilford leaves nothing unspoken between the lines. Everything down to his demeanor and facial expressions shows the constant struggle he endures with his inner demons and regret. Riley’s father convinces him to attend church, we meet probably my favorite character in this series in the town’s new priest, Father Paul (Hamish Linklater).

Father Paul emanates grace and belief in the words that he shares with his new congregation. Riley and Father Paul develop a bit of a reluctant relationship as Father Paul senses the struggles that Riley deals with and attempts to help him cope with the past trauma that haunts him. In what becomes a weekly meeting, the scenes between Linklater and Gilford are haunting in the sense that Gilford’s Riley challenges Father Paul to explain some of the biggest theological questions that have crossed most of our minds. Why does Gold let bad things happen? for example. It’s a genius approach to a hot topic without disrespecting the belief of others and in that I find it was credit that deserved to be given to touch on such a challenging topic that can be a source of serious debate without belittling either side of the argument. These scenes, which we see often, not only between Riley and Father Paul, but also other characters in the series, is where we see the character growth grow leaps and bounds throughout the series. It was absolutely captivating on every level.

Linklater gives an absolutely phenomenal performance down to the last minute of the series as Father Paul, as he is empathetic, charismatic, but can give off a sinister undertone at times. What this could mean? Well, you will have to watch the series to find that one out. This can be said, Miracles begin to bestow Crockett Island and the congregation of Father Paul. This isn’t we raised enough money to fix the leaky roof type of miracle either, we are talking about undeniable, logic defying miracles that cannot be explained or argued. As these miracles begin to unfold under Father Paul’s guidance, we see the town’s religious curiosity and revival of belief begin to grow across the townsfolk. In what could be seen as bringing a community together, this causes a rift between believer and skeptic that begins to take on face and becomes a monster of it’s own right.

This is one of the many strengths of the series as Flanagan not only delves in the horror of the supernatural or monsters, but he also touches on some very real evils that haunt us even today. Extremism can be a monster in its own right and it is one that does in fact infect the “Crock Pot.” This intertwined with the supernatural mystery that bestows the small island leaves you with plenty to fear and gives you a very binge-worthy series as the need to get answers can be as haunting as what lies in the shadows of Crockett Island. Flanagan has put together some fantastic work under his belt with Netflix as he keeps playing with various types of horror, not only in Midnight Mass, but in the work he has brought to the streamer. It’s very easy for a creator to find his niche and play with that to his advantage, but Flanagan seems to never be content with a typecast form of creating and continues to challenge himself and viewers to delve into the different types of horror storytelling that continues to captivate viewers.

Flanagan’s smart storytelling and directing excels on the backs of the brilliant cast that was put together for the series. Kate Siegel (Hush), Annabeth Gish (The X-Files), and Michael Trucco (Battlestar Galactica), are a few standouts in my opinion, but you can point anywhere in the cast list and that name had a moment throughout the series that excelled the ambiance of what Flanagan was trying to emulate. Rahul Kohli and Rahul Abburi in particular brought an ace to the series. Kohli playing the town’s sheriff and Abburi his teenage son, their Muslim upbringing in the dominant Christian community, gives the series a dynamic that raises many questions in regards to belief and the rationality of an outside perspective among extremism. This leads Kohli’s character to find himself at odds with Samantha Sloyan‘s character Beverly Keane, who among a world built for horror and the supernatural by Flanagan, still manages to give evil a very human and flesh face as you will absolutely have some strong feelings about her character.

Although Midnight Mass does not pack the supernatural punch that you might get from The Haunting of Hill House or Bly Manor, Mike Flanagan has delivered his most impressive work to date. The world he builds and the characters gives us plenty to sink our teeth into as we await the sinister horror to reveal itself. The series delves deeply into thought provoking theological situations and gives us horror both in the supernatural and human variety. The series will raise questions of belief, faith and allow you to connect with character through the reflection of grief, guilt and family which is doused in the traditional horror elements that is twisted into a larger scale that gives the viewer a more unsettling and scarier presentation that is meant to be absorbed from beginning to end.

Midnight Mass will be available on Netflix on September 24th, 2021.