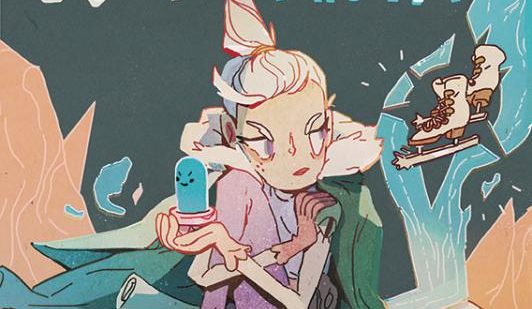 Top Shelf is set to release Junkwraith. A new sci-fi novel that is full of wonder, intrigue, and a unique world built by Swedish cartoonist Ellinor Richey. The new series will be the newest addition to IDW‘s Young Adult imprint that features original graphic novels. We have an exciting preview to share with you today for this new exciting story that focuses on the ice-skating prodigy Florence who after stepping away from the sport becomes haunted by her gift.

The full synopsis for Junkwraith is:

“What she once possessed… now threatens to possess her. This vibrant Swedish debut graphic novel is an epic quest for the things left behind, with icy-cool artwork and astonishing sci-fi settings.“

“What happens when our most precious belongings… no longer belong? When something we loved suddenly becomes junk, a powerful energy is unleashed. One night, ice-skating prodigy Florence Sato is overwhelmed by pressure and throws away her skates. This fateful moment accidentally summons a “junkwraith,” a terrifying ghost which seeks revenge for its abandonment by attacking the memories of its former owner. Before she forgets who she is, and to find out who she really wants to be, Florence must set off (with her trusty digital assistant Frank) on a long journey into the Wastelands to put to rest the monster she created.”

The series now sees itself in a physical release after originating as a webcomic series that Richey would release on the social platform Tumblr. With a twist on the previous animated designs offered in the webcomic series, Richey has now adapted a unique art style to breathe new life into the series in its graphic novel release. The expressive art that accompanies the intriguing narrative is sure to take you on a journey unlike any you have taken before.

Junkwraith is set to release tomorrow January 18th, 2022 and the graphic novel boasts a respectable 288 pages. The graphic novel will be available at bookstores and local comic book shops near you ( find a comic shop near you using Comic Shop Locator) on January 19th, 2022. Check out the advance preview below: