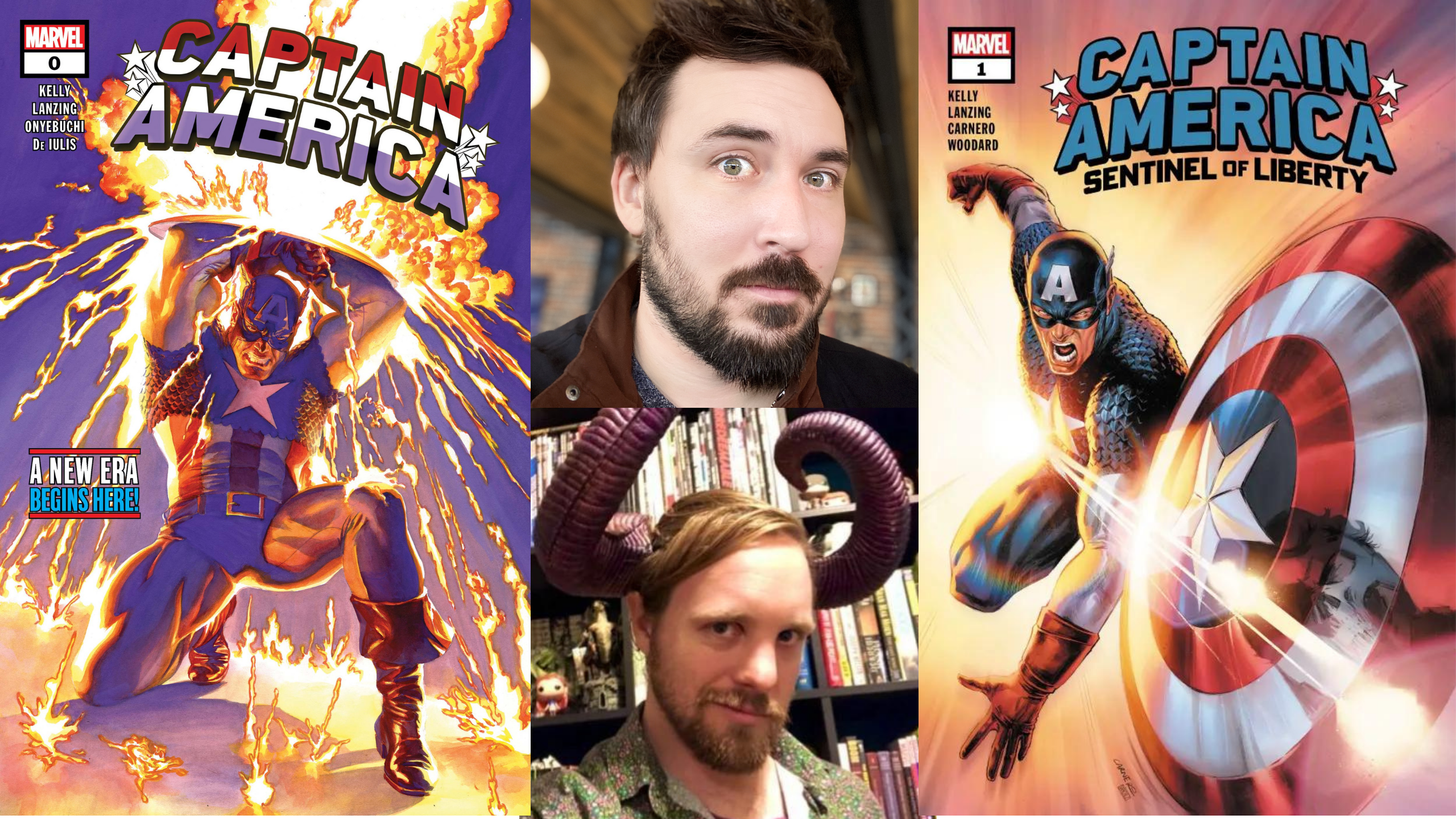 Super hive mind Jackson Lanzing & Collin Kelly join us to talk about Captain America #0 and how that will lead into the two side-by-side series, Captain America: Symbol of Truth by writer Tochi Onyebuchi and artist R.B. Silva that sees Sam Wilson take the mantle of Captain America in what will be a more classic run of the hero while Lanzing and Kelly are joined by superstar artist Carmen Carnero for their series Captain America: Sentinel of Liberty that sees Steve Rogers and Bucky/The Winter Soldier together in a new series that will show you the heroes as you have never seen them before.

Check out some of the Q&A below and listen to the full audio interview to get the full scoop on what Steve Rogers will be getting into this June:

GN: You have Captain America #0 that is set to lead into two new Captain America Series starring Sam Wilson and Steve Rogers, what can people expect in the upcoming series?

Lanzing: It all starts here, man. Captain America number zero is a kickoff issue, the big oversized book that kicks off the next two ongoing runs of Captain America that there are going to be two right Symbol of Truth starring Sam Wilson which is written by Tochi Onyebuchi with art by R.B. Silva, and Captain America Sentinel of Liberty written by us (Jackson Lanzing & Collin Kelly) and art by Carmen Carnero…

We’re just taking Sam Wilson into the wider Marvel Universe, and really understanding how the whole Marvel Universe deals with Sam Wilson’s Captain America because the character has never gotten to hold the mantle for a very long time and really just like tell those classic Captain America stories So that’s really where Tochi is going, you’re going to see Deadpool team-ups, you’re going to see, you know, all kinds of stuff.

On Sentinel of Liberty, we’re going to be telling a very sort of, it sounds self-aggrandizing, to say it’s like a game-changing story but what we are is we’re telling a story that takes a lot of secrets that have been long-held about not just Cap’s origin, but about the meaning of the shield about the meaning of his relationship with Bucky about the way that he needs to operate, you know, moving forward in the future, and revealing those to Steven and Bucky, and focusing very much on their brotherhood, on their friendship and on what the secrets do to that relationship. How these two men move forward in the future in very different ways. We’re going to be shaking up Captain America’s status quo in a lot of ways.

Kelly: And Cap zero (Captain America #0) was just a fantastic experience for all of us because we actually wrote it with Tochi. We’re writing the Steve pages, he’s writing the Sam pages, it was much more like a jazz session, where we’re able to kind of pass pages back and forth and develop one cogent story that shows off kind of what each of us is going to be bringing to our characters in turn, the voice that we’re going to be landing while tying them up in a massive plot by the bio fanatic ARNIM ZOLA!

Lanzing: So much of what we’re doing in Captain America is new characters, we have a very similar vibe to what we’re doing in Neo Year (Batman Beyond: Neo Year) where, whenever possible, we’re trying not to recycle old characters. We’re trying to create new stuff, put new toys in the toolbox, but very much our objective on The Harbinger, which we just finished on this, Captain America run, and on Batman Beyond as well.

But once we realized that we were going to be able to do the zero issue, we sat down with Tochi, we all said, Okay, well who’s the character none of us are using that we all want to write like, is there a character that we just all desperately love and would just love to spend 30 pages just having a blast with and we all just looked at each other and we’re like, well, it’s clearly Arnim Zola.

It was just such a blast to write, he’s so big and curvy-ish and mad science and wild. Frankly, since a lot of both books are about taking Captain America stories and moving them into a new era that reflects a lot of what we loved about classic Captain America not to say that we don’t love the many very socially conscious stories that have come out of Captain America the past few years. Ta-Nehisi Coates’ run and U.S. of Cap (United States of Captain America). These are great stories and will have bearing on what we’re doing but it felt important to make our own mark and to make a shift in the books from both sides.

I think, you know, looking at Chris Cantwell’s run, like United States of Captain America did a great job of answering that, I think coming out of there, Cap knows who he is, knows what it means to be Captain America more than he ever has, which meant that the playing field was free for us to then look at not What does Captain America mean but what does Steve Rogers mean? I think that is really going to be what people are going to find with our run.

GN: I saw that one of the promo images had a skull masked character, and you probably can’t talk about it. But I want to know how excited you are to finally see the readers be introduced to this character?

Kelly: I think he is just such an icon and just matters so much, that getting to step into this role, as you know, for a while, for as long as we possibly can, the guys we’re going to be put in charge of his legacy is an incredible honor and responsibility. But at the same time, we don’t just want to play the hits, which means we’re going to need to take swings, we’re going to need to introduce things into this character in his life that, you know, we don’t know what the fan base will think. But we have a strong feeling they’re going to love it. This will be the kind of the first test you know, we’re not doing anything thoughtlessly…

There’s probably a little bit of mystery behind it. But he is merely the tip of an iceberg. And he is a clue that will unlock something even deeper something that actually has already started…

Lanzing: The thing here is that people are very are getting hyped about the skull-faced gentlemen, and I’m not going to use his name but I’m very happy that people are digging in on that. They’re curious and they’re wondering like, oh, is that Bucky? It’s not Bucky? Oh, is that this character? Oh, is it that character? What I will say is to Collin’s point, he’s the first step down a long line. Don’t get too attached. This is going to be a long story with a lot of moving pieces and that’s just the very first step, but I love that people are hyped. His identity has a large significance to what we are planning to do with this book and how we’re incorporating the book. I think within the context of issue one, you’ll be able at least to start to see that and what we’re trying to do with his character and the wider conspiracy and story that he introduces us to.

Kelly: This is a story about mysteries and secrets and unpacking and when we were originally approached to tell this story, you know, we’re like, yes, it’s going to take us 12 issues to slowly unravel it piece by piece. They sat down with us and said, like, no, guys, get to the good stuff and that was a great piece of information. So, you know, this is going to be riddled with secrets and we’re going to be unpacking it slowly for the fans, but not so slowly that you are going to be bored. You’ll know what’s up by issue three.

GN: With you guys inspiring the next generation of writers, I do have to ask, what inspires you at this point in time?

Lanzing: Yeah. Colin, I think that’s, that’s solid. I mean, we do, we do, do genuinely get to act as that engine of inspiration for one another, which is one of the beautiful things about the partnership.

Kelly: I can speak to both of us a little bit because one of the things that most inspires us is the world outside our windows, from the very first when we sat down to write Hacktivist, the thing that inspired us to work on it was watching as the Arab Spring as Twitter as social media was being used to activate a group of people who were being squashed, whose culture was being robbed of them. Watching the bravery as normal citizens stepped out into the world stepped out into their streets and said, F*$k you to the powers that be, you know, the kind of trauma that our nation is dealing with, you know, the news every single day we’re looking at, we’re saying, where are our heroes?

Like, where are the people who are supposed to be saving us and the truth of the matter is, we have to be those heroes, you know, I’m not going to run out there, you know, with a cowl, because I’m not the Knight, I’m a writer, you know, we all we can do the weapons and our tool belt is telling stories that can inspire and that can illuminate and can maybe show people a path forward, even if it’s couched in, you know, a super rad shield throwing handsome blonde man, right, like, that’s, that’s what we want to do and that’s what we want to bring to our stories.

Listen on your preferred platform by following this link: Listen Here