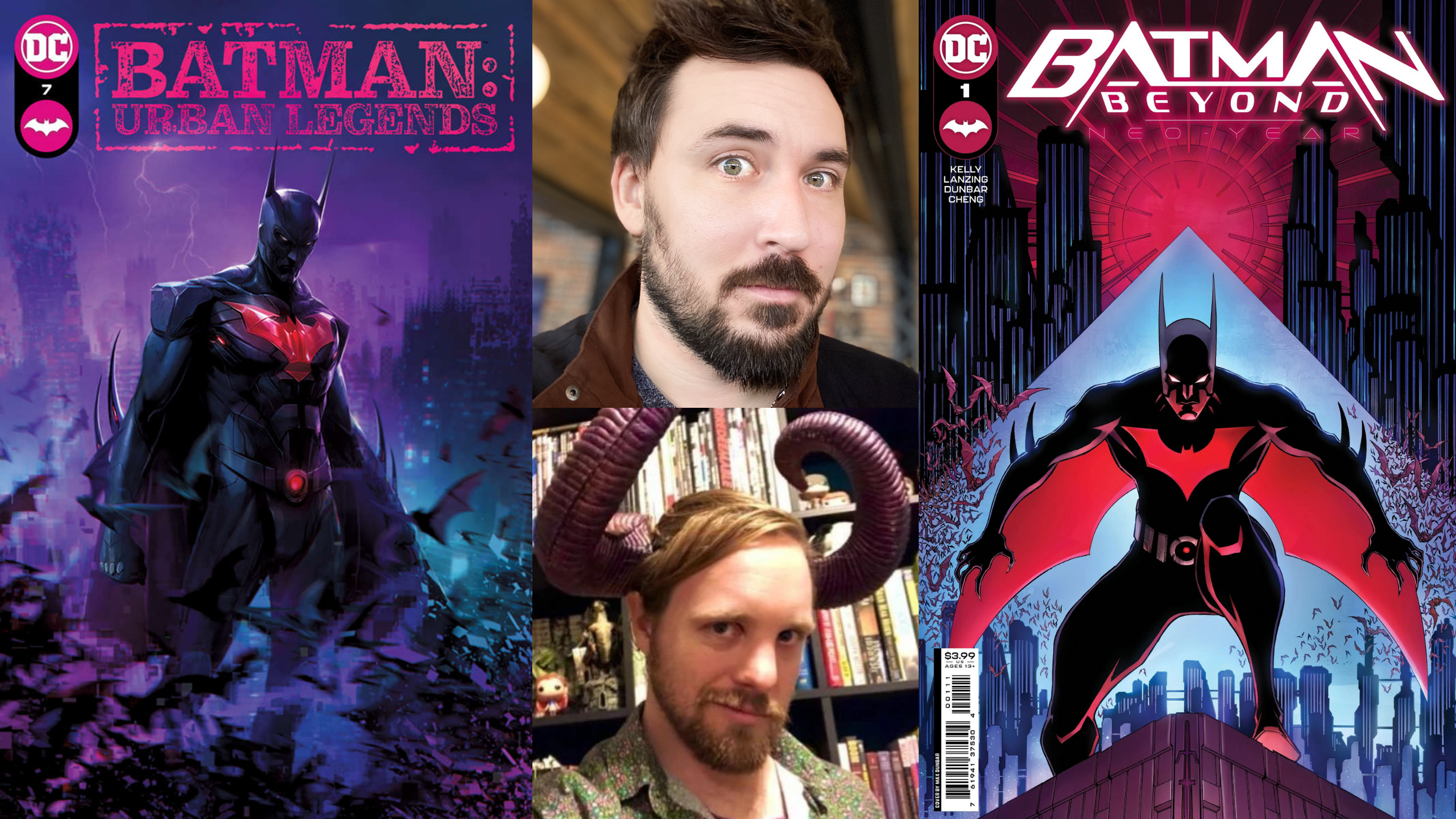 Super hive mind Jackson Lanzing & Collin Kelly join us to talk about the premiere issue of their new DC Comics series Batman Beyond: Neo Year, the unofficial #0 issue setting up Neo Year in Batman: Urban Legends #7 and what the thought process behind Terry’s journey is, and all the wildness coming to the series that will make every fan of the Batman Beyond series very happy.

Lanzing and Kelly also break down how the hive mind came to be, why Terry was the only option for this story and their canonical approach to the series. Check out the Q&A below:

GN: I’m not saying he’s personally my favorite Robin but he tends to be the crowd favorite. How did you guys choose Terry McGinnis as your protagonist, instead of Dick Grayson or any of the other Robins?

Lanzing: When you say Batman Beyond to us, you’re talking about Terry McGinnis. I think that’s in large part because we both come from a real love of the show, of the world that burst him and that whole squad created. I think it’s an iconic piece of sort of Batman fiction from our childhoods.

Kelly: The fact of the matter is, he’s not a sidekick of Batman, he is Bruce’s replacement. I always think of the end of Men in Black, right? When, when Agent K looks to J and says, you know, I wasn’t training a partner, I was training a replacement. I think that’s really key here. It’s about Terry realizing it for himself, you are not a child, you are not the B team. You have to step up to the major leagues and now you have to be the hero that this city needs.

Now you’re stuck in what seems to me like one of the greatest dark nights of the soul you can have, no pun intended, which is how exactly am I supposed to be better than Batman, the greatest of all DC superheroes? How am I supposed to take this mantle and be better than Bruce Wayne? I’m not this man. I’m my own man. And what does that mean? Like those questions just generate a story there. It’s an endless story font for us right now and very exciting. So that’s where Neo Year comes from.

“I do always want to preface by saying go find Batman Urban Legends #7, get it digitally if you can’t get it physically, but find that issue and read that story because that story is our zero issue. It’s going to define some stuff. It’s going to tell you how Bruce Wayne died and it’s going to launch you into the story that Neo Year #1 presents.”

GN: Is Neo Year taking a traditional approach to Batman Beyond, or can readers expect some fun twists to Terry McGinnis’ story?

Lanzing: He is Terry, he’s just Terry at the end of his journey. So if you’ve watched Batman Beyond that would be on his cannon. Here. We are not. This isn’t like if you want a sort of different take on Terry McGinnis, like a totally kind of rebuild of the world and the character Beyond the White Knight is out there right now and is doing that. That is Sean Gordon Murphy’s take on Batman Beyond.

It is its own thing and gets to live in its own universe and play by its own rules. Our challenge was to take what people love and know about Batman Beyond, the canonical story, and series, and we are writing the next fundamental chapter, we’re changing a huge element of it, and then pushing it forward into new realms.

Kelly: Terry in the show was in high school, you know, this Terry has graduated, it’s a small difference. But like if we all remember what we were like at 17 and what we were like at 22. It’s like, wow, they are completely different people, even though you share the same DNA. So I think that’s just a really easy step up to be like, well, this is Terry. He’s older, he’s wiser, a little bit and he’s been punched in the guts way more.

Lanzing: it’s important to note that when Neo Year #1 opens, Terry doesn’t have the Batcave, he doesn’t have Bruce, he doesn’t have Ace. He doesn’t have his family. He doesn’t have Dana, he doesn’t have any of the people in his life who have given him stability, all of that is gone. It has all been replaced by a malevolent artificial intelligence in every camera and every building and every automated system of Gotham City that wants Batman off the board. So you have Terry as the lone standing legacy of Bruce Wayne and this series that we all love, trying to figure out how to keep it alive, even though the world has ostensibly moved past it.

GN: I always find that Bruce/Batman is a complex character. How did you get into the mindset of what Bruce/Batman would say in this exact moment if there are any flashbacks with Bruce?

Kelly: We can tell you that part of our journey here was to look forward and not look back…

This is Bruce, who’s seen his successes and his failures, he’s seen the world change out from under him. And with that kind of perspective, he knows things that a much younger Bruce just didn’t and couldn’t wrap his head around. One of the things that we do here as Jack points out, you know, in our story, Gotham itself has turned against him, it has been consumed by malevolent A.I. It is in every system, it is in every security camera.

So the only place that Terry is safe to store his thoughts is that we say he gets to go analog, right? He’s keeping a journal and in that journal, he will ruminate on things Batman has told him on the advice that Bruce has given him moving forward and what that means, but not having an active Bruce Wayne in his head to question to unpack to riddle out secrets. That really is a big impact, right?

GN: Is this almost like a spiritual Yoda type deal?

Lanzing:  But without that character, being able to be there, the way that Yoda is, I think that that’s really important to us. To not cheapen the idea of leaving Bruce behind by trying to keep him around somehow, drawing that direct line and saying we’re not bringing this character back. This is the story of the resurrection and continuation of Batman and how Terry takes that on without Bruce in his ear and without Bruce dictating his every move.

And in that way, I mean, very much you can draw some parallels between like, the larger Luke Skywalker storyline and what it means to or even like the array storylines. But all of that still has these direct echoes these ghosts that can come back and be like you’re doing good kid. Brute Terry doesn’t have that. for Batman to have that it would be like Thomas and Martha Wayne over Bruce’s shoulder all the time, being comforting ghosts and telling him he’s doing the right thing.

Kelly: Now I am realizing the further we do have a really massive Star Wars connection, because one of our villains that you’re going to meet that you meet at the end of issue one and you’re going to meet a lot more of it, the series progresses, does have a super rad laser sword.

Batman Beyond Neo Year #1 is available now, be sure to look for a copy at your favorite local comic shop (find one near you here) or you can read it digitally. If you want to hear Lanzing and Kelly go into more depth on Neo Year, and hear their take on whether Thomas Wayne would approve of Bruce’s vigilantism, listen to the full interview below:

Listen to the interview on your preferred platform: Click Here