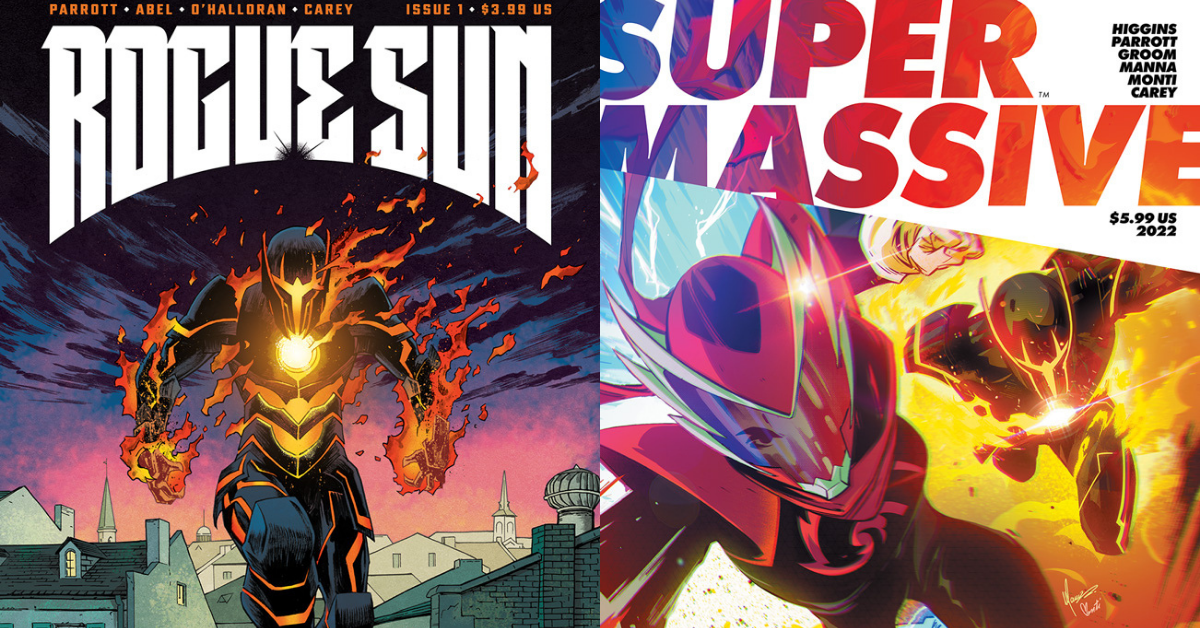 The month will kick off with an eye-melting, page-turning crossover superhero event in Supermassive one-shot by writers Kyle Higgins, Ryan Parrott, and Mat Groom, and artist Francesco Manna. Then, fans will be primed and ready to return to comic shops to get their hands on the pulse-pounding new ongoing series launch—Rogue Sun by writer Ryan Parrott (Mighty Morphin, Power Rangers, Dead Day) and artists Abel (Harley Quinn, Crimes of Passion) & Chris O’Halloran.

“The best part of making comic books is the collaboration,” said Higgins in an exclusive scoop about the announcement that ran on io9. “My favorite part is when that collaboration is with your friends. From Power Rangers to Ultraman, Mat, Ryan and I have done quite a bit of world-building together. All of which feels a bit like a warmup act for what we’re building now. To echo Mat’s sentiment—there’s a reason we’re calling this Supermassive. Thirty years ago, Image changed the superhero game. This February, we’re excited to help kick off the next stage of where creator-owned superheroes can go.”

Groom added to io9: “There’s a tremendous freedom that comes with doing creator-owned comics. But that freedom comes with a responsibility—to experiment, to swing for the fences… and maybe even to encourage people to rethink where the fence should be. I think anybody who has been reading Radiant Black can attest to the fact that Kyle and Marcelo have been living up to this responsibility —and I see Supermassive as not only continuing this but escalating it dramatically. There’s a reason we gave it that name!”

Manna said also: “One of the things I love most in the world of comics is the feeling between creators working on a project. It’s a synergy that drives every story and every page to its best. That’s what brings Kyle, Mat, and I together again for this Supermassive story.”

These two epic superhero drops will leave Radiant Black fans breathless and provide a jolt of high octane action to new readers interested in jumping in on the excitement.

Parrott comes to Image—after lending his talents to 50+ issues of Power Rangers—for his first image book by creating an original Image superhero. “I was thirteen when Image Comics was born and I remember collecting every single one of those founding series. So the idea that thirty years later, I’d add a character to the ranks and become a part of this legacy is more than a dream come true,” said Parrott. “To me, the beauty of the original Image shared superhero universe was that it was modern, accessible, and free from the weight of massive corporate oversight. It felt like it was just a bunch of friends telling stories together and we wanted Supermassive to encapsulate that same spirit.”

First, 2021’s hottest new superhero Radiant Black launches into his first-ever crossover event with the Image Comics debut of Inferno Girl Red—spinning out of the highly successful Kickstarter—which is coming to Image later next year and the first appearance of Rogue Sun! Power Rangers: Shattered Grid architects Higgins, Parrott, Groom and Manna (Marvel’s Ultraman), and colorist extraordinaire Igor Monti, unite for a one-shot, extra-length story so big it can only be called—Supermassive.

“It feels to me like Rogue Sun was never created; he just burst out in front of us. Being part of this is a thrilling flight in so many ways!” said Abel.

Next, Rogue Sun kicks 2022 into high gear when rebellious teenager Dylan Siegel discovers that the late superhero Rogue Sun was his estranged father, Marcus—and that he’s inherited his father’s mantle. Tasked with protecting our world from the forces of the supernatural—and solving his father’s murder—Dylan will be forced to come to terms with the man he’s spent the majority of his life hating. This new ongoing series is a supernatural murder mystery that explores the complicated bond between father and son and cements itself squarely in a corner of the Image Comics superhero universe.

Supermassive one-shot will be available at comic book shops on Wednesday, February 2:

Rogue Sun #1 will be available at comic book shops on Wednesday, February 16:

Both Supermassive and Rogue Sun will also be available for purchase across many digital platforms, including Amazon Kindle, Apple Books, and Google Play.