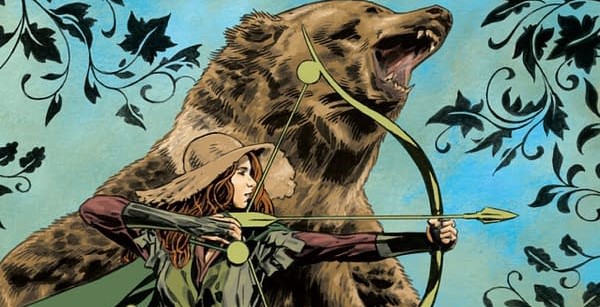 DC Reveals Details for the Grand Return of Fables

DC Comics has revealed details of its upcoming revival of the epic fantasy series Fables. The series has been on hiatus for nearly seven years now but that has not slowed down the fandom or love for the series. Even now, we see Fables entering other mediums as The Wolf Among Us 2 makes its way back into current-gen platforms in the near future from Telltale Games. We also saw Bigby take on the Dark Knight in a crossover event Batman vs. Bigby: A Wolf in Gotham. Now, the main series makes its way back onto comic bookshelves in May.

Returning with Fables #151, the series will bring back beloved characters such as Snow White, Bigby Wolf, and Rose Red. Along with what we can almost guarantee will be new faces joining the fold, is also a new mystery, and it’s a dark one.

As it was previously revealed, the original “big bad” of Fables turned out to be the Adversary which would later be revealed to be Geppetto. In the new series revival, a new threat emerges, although the publisher is being tight-lipped about revealing who it is. “The Black Forest” arc will pick up right where we left off in issue #150 and will hopefully serve as a new entry point for a new era of fans of our fabled characters.

“The dust has barely settled from the climactic battle between Totenkinder and Cinderella—and everything is far from happily ever after. A legendary new adversary has arrived, and he plans to get even with Geppetto for the mess that has been made of Manhattan. But it’s a new day…and with it, a new Jack in the Green has arrived in the Black Forest. And within the emergency room of a New York hospital…a Fable long thought dead returns!”

Original series creator and writer Bill Willingham will return to pen the new story arc and he is bringing two fan-favorite series artists Mark Buckingham and Steve Leialoha. With the crossover of the Fables-Verse with DC, it could even open up doors that we have not even dreamed of yet. For now, we just celebrate the return of an iconic series and its iconic creators.

Fables #151 will be available at local comic shops and digitally on May 17th, 2022. Check out the short preview and covers below: