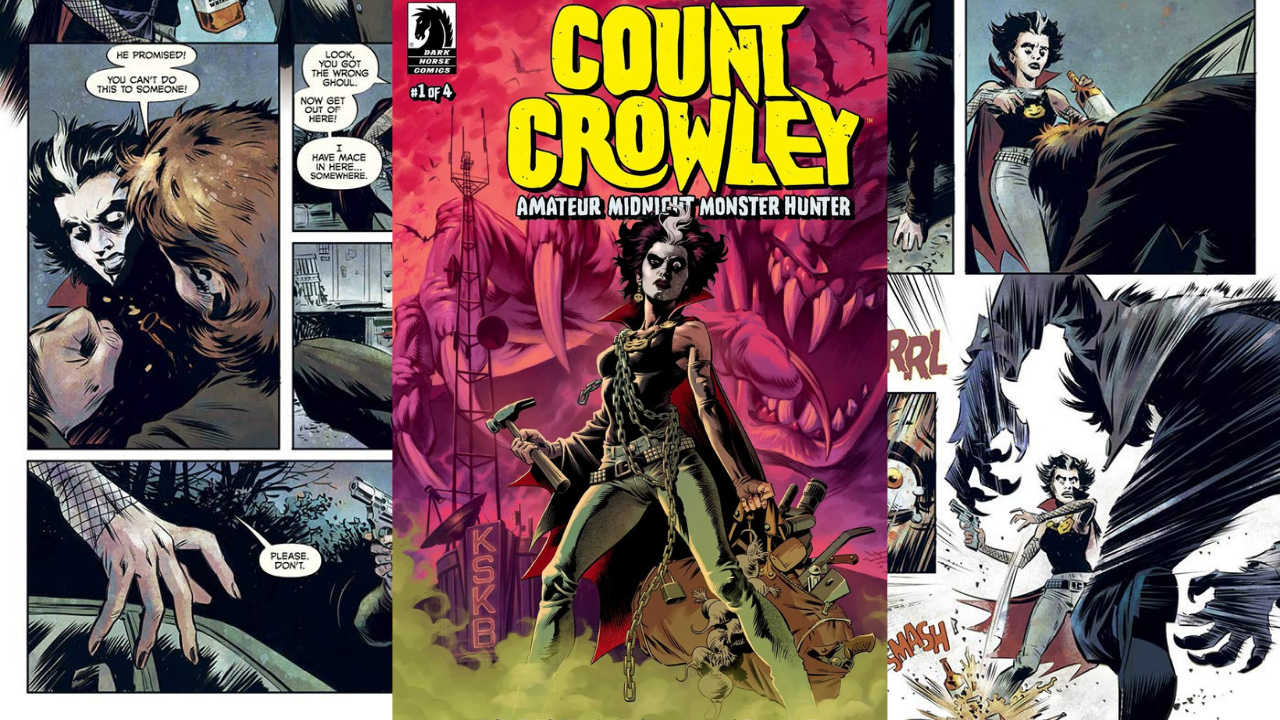 Dark Horse Comics has announced that Count Crowley will be returning next month for another monster hunt with its second volume in the comic book series that follows amateur monster hunter Jerri Bartman. Count Crowley: Amateur Midnight Monster Hunter will return to stores this March.

The series is created by the talented actor David Dastmalchian. Dastmalchian has brought many characters to life on the big/small screen as well through his voiceover work, having played a role in films The Suicide Squad, Dune, Batman: The Long Halloween, and CW’s The Flash. He now brings his talent as a writer back to Dark Horse for another entry in the life of our failed TV journalist turned monster hunter.

The first volume followed Bartman who after tanking her career due to her struggles with alcohol, returns to her Midwestern hometown and takes a job as the host of a midnight monster show. She quickly learns that monsters are in fact real and is led into a crash course of monster hunting to protect her loved ones and the townsfolk from a vampire making their way into town.

In speaking about Jerri’s journey and how he has been able to continue her story as she continues to battle monsters both externally and internally, Dastmalchian said:

“When the pandemic stopped the world, I spent countless hours in my home late at night thinking about what I want to do with my life, what kind of stories I need to tell and how I want to wrestle with the big questions that haunt me. With no promise of more Crowleys, I still wrote Jerri’s story and took her further into her quest to defeat the ‘bad’ monsters while defending the ‘good’ ones,”

Writing about her internal struggles, her family stresses, her battle to find her true, authentic, and actualized self all helped me navigate the strain of the lockdown and my depression throughout the pandemic.”

The series initially launched in 2019 and the next entry will bring together Dastmalchian and artist Lukas Ketner, colorist Lauren Affe, and letterer Frank Cvetkovic.

“To now be sharing these stories with the world is one of the greatest gifts of my creative journey,” says Dastmalchian. “Back with my incredible partners, Megan, Lukas, Lauren and Frank, I am over the howling moon to share with the world this next chapter in Jerri’s journey! No longer ‘Reluctant,’ she’s now a stumbling, fumbling, courageous ‘Amateur’ Midnight Monster Hunter! Here’s hoping she makes it to morning!”

As a longtime fan of the comic book world, Dastmalchian now leaves his mark on the industry as a creator as well to add to his impressive career that began with a small but haunting role in The Dark Knight. Now it seems like Dastmalchian is working on becoming accomplished in yet another medium with the help of the talented creators on this series.

Count Crowley: Amateur Midnight Monster Hunter will be available at your local comic book shop (find a shop near you using Comic Shop Locator) and digitally on March 23rd, 2022. Check out the full cover below:

Babylons Fall Will Get Free PlayStation Demo Next Week