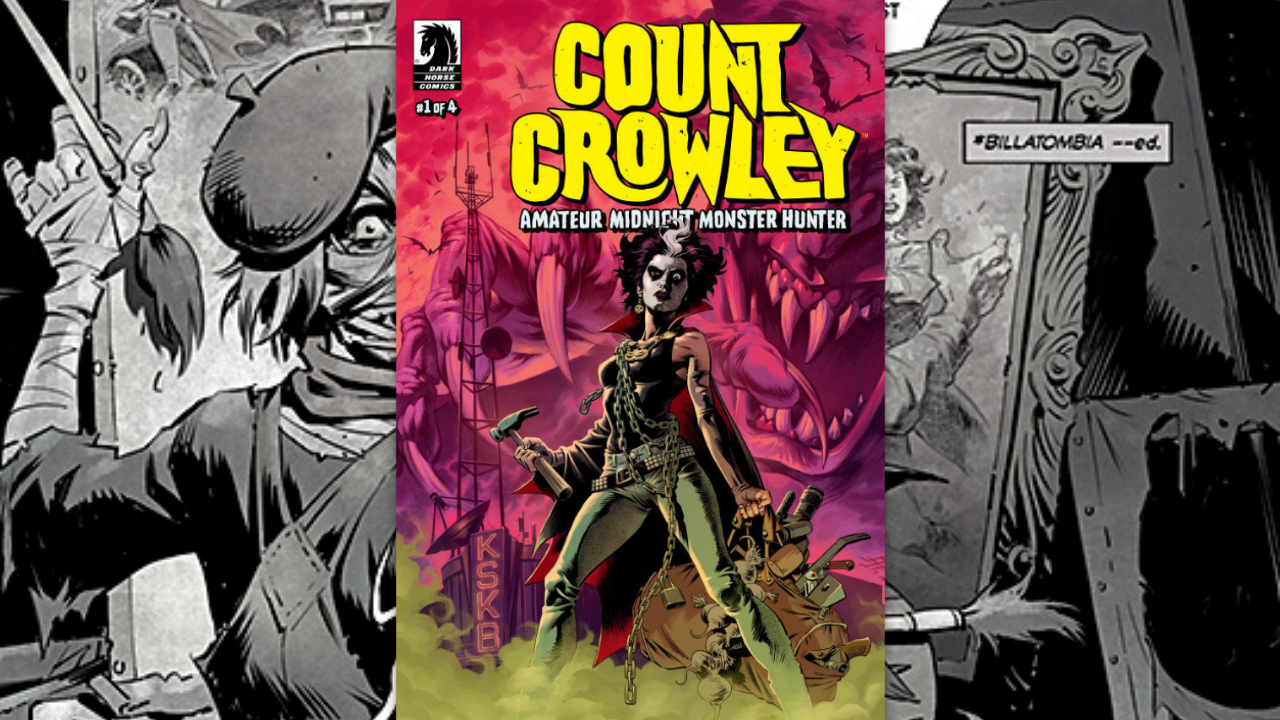 Dark Horse Comics made many fans happy with the announcement of the return of this gem of a series when they announced another four-issue series in Count Crowley: Amateur Midnight Monster Hunter. Even better was that along with writer David Dastmalchian, the rest of the Scooby gang was returning with Lukas Ketner, Lauren Affe, Frank Cvetkovic, and editor Megan Walker all back for another hunt. With all the pieces in place, we fully expected to jump right in with Jerri’s struggles of her addiction, self-sabotage, supernatural creatures, and most importantly it seemed was the disappointment she felt she emitted, especially with her brother.

The next stage in Count Crowley takes will start here according to Dark Horse‘s description below:

“It’s been a hell of a week for Jerri Bartman. She lost her job, crashed her car, took the only gig available hosting the midnight monster show, and . . . oh yeah–dismembered a zombie. No big deal. Now, to protect the people she loves, she’s going to have to take a crash course in monster hunting. And quickly–a vengeful vampire just booked a first-class flight into town.”

The series picks up right where we left off, with Jerri having taken a step forward with her battle against her addiction, she finds herself working towards normalcy in at least one aspect of her life. The rift she had created between herself and her brother seems to be healing, and she is reluctantly open to adopting the persona of Count Crowley, at least for the time being as she makes very clear to her brother.

On the more obscure side of things. Jerri has just killed the Billy and continues to hunt the werewolf that opened up this nightmare for her. All this among the greater threat on the horizon is sure to keep Jerri on board this wheelhouse of threats that keep popping up. As Dastmalchian put it during an interview earlier this month, “Jerri had no time to pat herself on the back because something and someone much more deadly and dangerous than the billy (the zombie) is on its way.“

There is a sort of brilliance in the way Count Crowley is presented. With what I can only assume is inspiration from the Crypt Keeper, the story opens with an eerie narrator to brush away some of the darkness that the series can bring with a bit of comical fresh air. The gem in the series, other than the homages to classic horror and the 80s setting, is definitely found within Jerri FU*&$@G Bartman.

Not often do we get to see such a complex and real character that relates to the most troubled parts of ourselves. Sure, we all want to put on spandex and swing from the rooftops, but how many times can you look into a hero and say, yea, I’ve been there. Her constant spiraling all while finding moments of grace that give her strength to dig in and climb out of the pit that our inner demons sometimes make so comforting is sometimes too wildly relatable.

Ketner and Affe add layers of enjoyability to the series with the unique style and look of the series. Reading through the pages always takes me back to watching Creepshow and seeing all the nostalgic haunted house ambiance just pop out of the screen followed by the quick flip of comic pages, knowing that you were in for some classic horror.

That is the spirit that the artists have captured for me. The lettering is sublime, I say it time and time again, and I will continue to do so until I am blue in the face. Lettering in my mind is best done with obscurity. The seamlessness in which I caught myself reading the dialogue without it stealing away from Dastmalchian’s writing of Ketner and Affe’s art and colors is to be commended and Cvetkovic does a brilliant job tying the pieces from the other creators together.

Overall, Count Crowley: Amateur Midnight Monster Hunter #1 is a perfect next step in the series that does not let a hiatus slow them down by putting readers right back where we left off. Nothing is lost in the transition between the volumes and with such a rich story and profound characters, this is one that we don’t want to let not one minute slip by us. Dastmalchian has many talents, but his ability to spin this tale has made me a fan of his work all over again and the embrace of one of the greatest genres in all mediums of entertainment is paid homage in a way only true fans of horror could.