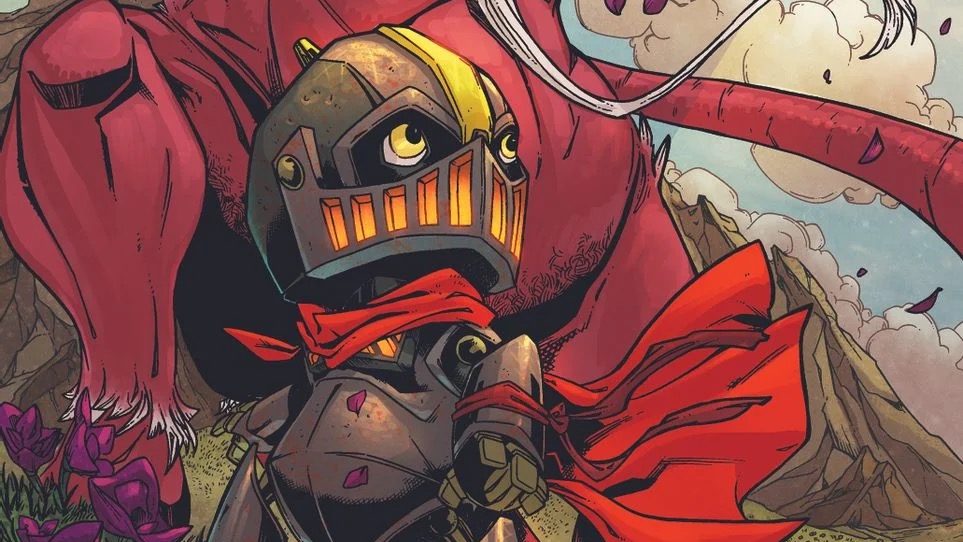 Review: Canto III Lionhearted #1 – Riveting Fantasy Action Jumpstarts What Could Be An Epic Showdown Between Canto and The Shrouded Man

Synopsis: The tiny clockwork knight in search of a heart has found his people’s freedom and has saved them from the curse of the Shrouded Man, but is he ready to face his enemy on the battlefield? After making the ultimate sacrifice, Canto bears a weapon that could defeat the Shrouded Man and free all the inhabitants of the Unnamed World. Now, he races to find a hidden settlement of his former slavers to enlist them as allies in the coming war. That is… if the Shrouded Man doesn’t find them first…

It wasn’t long ago that we were following the tale of a little tin knight who had set himself on a quest to rescue the one he loves. He has outsmarted giants, rescued faeries, and faced evil when most would succumb to fear. Most of all, Canto has shown us that our courage can manifest in many different ways, and it can grow perpetually regardless of size. Canto has shown us this time and time again as we have seen what he lacks in size and strength he makes up in ever-lasting courage. This has all lead us to the first issue of the next volume of Canto, all the alliances, encounters, and sacrifices have led us here. The first of the six-issue series paves the way for what Canto and friends will be up against.

David Booher provides a level of writing that elevates this fantasy world and the characters that fill it. Booher leaves no line wasted as he catapults readers into what could very well be the final showdown between Canto and The Shrouded Man. I am by far a man of culture, but if I was, Zucker’s style fits that of rustic painting displayed in a museum. The blend of lime art and colors really sells the reader on this fantasy tale feeling like we are reading an old book retelling an old tale otherwise lost to time. But again, I’m no man of culture so we will leave it at, Booher and Zucker understand the world they are building and have knowledge of these characters that resonates itself on a page that nobody else could replicate. This should be something that really drives the success of the adaptation of Canto we will be seeing in the future, and this is guaranteed to be the beginning of something magnificent.

One of the special things about this particular issue is that we get to see just how much the world of Canto has grown. We now see Zucker and Booher get to dig back to prior issues for reference, and as they expand Canto even further, we now see them going back to other characters or places and make sure that they leave nothing behind as the journey progresses. This is a testament to the growth of Canto and the reader reaps all the benefits from this. No longer a brave little knight, Canto now finds himself the heart of a rebellion that will impact much more than his own people as it will shape what their world will look like forever.

Overall, Canto continues to reach for the stars and surpasses them every single time. The collaborative understanding of this creative team is inspiring all on its own. The precise, and consistently strong storytelling from Booher and the ability of Zucker to tell a story with the brilliant use of angles and body language leaves the reader never feeling like a panel, even without dialogue is lacking in moving us forward into this journey. The colorwork just seals the deal. The color palette, although not the most vibrant, fits this particular series as perfectly as a fairy tale ending. This series has only gotten better and better since it premiered a few years ago. If you haven’t jumped on the Canto fandom, now is the time to do it.