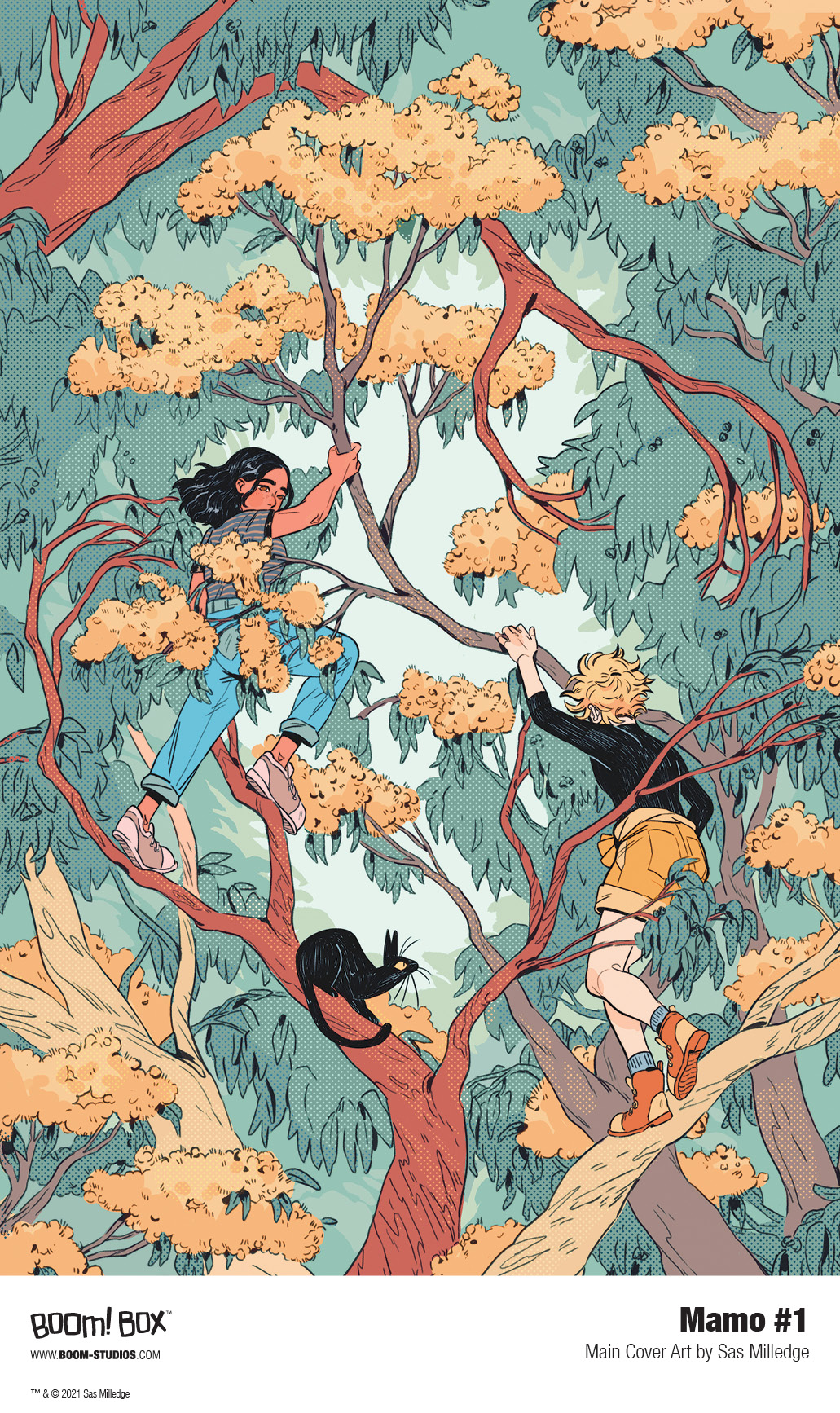 BOOM! Studios today announced MAMO, the five-issue debut comic book series from acclaimed illustrator and rising star cartoonist Sas Milledge (The Lost Carnival: A Dick Grayson Graphic Novel), about a young hedge witch who returns to her hometown after her grandmother’s death, only to find an unlikely new friend and a series of mysterious magical disturbances that need to be solved, available in July 2021.

Orla O’Reilly has never been the type of witch to put down roots. The youngest in a long line of hedge witches, Orla finds herself back in the town where she grew up after her grandmother, Mamo’s, death. But without Mamo around to deal with the town’s magic, it’s quickly fallen into chaos and now there’s a poltergeist in local Jo Manalo’s attic!

When Jo goes to Orla for help, the young hedge witch is reluctantly pulled into the town’s complicated relationship with the Fae, and Jo gets a crash course on the surprising world of magic that lies right beneath the surface of her normal, boring hometown. They’ll have to work together to find the source of all their otherworldly problems but are the two up to the task?

Sas Milledge is an artist based in Melbourne, Australia. She has done design, comic, and illustration work for DC Comics, BOOM! Studios, BlinkInk, and Passion Pictures amongst others.

“I am so excited to finally share MAMO with the world! This book has been circling around my head for the better part of a decade, and I’m so glad it has finally landed here in its final form; a story about family and friendship filled with witches, birds, faeries, and trolls!” said Milledge.

“Sas Milledge has magicked into existence an exciting new world for us to explore, filled with the most delightful witches, magic, and mystery,” said Sophie Philips-Roberts, Associate Editor, BOOM! Studios. “MAMO is a fresh new take on the modern witch, and also, an insightful look at what it’s like to grow up, move away, then come home as an adult to deal with family and legacies long forgotten.”

MAMO is the latest release from BOOM! Studios’ award-winning BOOM! Box imprint, home to groundbreaking original series such as Lumberjanes by Shannon Watters, Grace Ellis, Brooklyn Allen, and Noelle Stevenson; Juliet Takes a Breath by Gabby Rivera and Celia Moscote; Giant Days by John Allison, Lissa Treiman, and Max Sarin; Specter Inspectors by Bowen McCurdy and Kaitlyn Musto; The Last Witch by Conor McCreery and V.V. Glass; Ghosted in LA by Sina Grace and Siobhan Keenan; The Avant-Guards by Carly Usdin and Noah Hayes; Fence by C.S. Pacat and Johanna the Mad; Goldie Vance by Hope Larson and Brittney Williams; educational series Seen: True Stories of Marginalized Trailblazers; and the upcoming Save Yourself! by Bones Leopard and Kelly and Nichole Matthews.

Print copies of MAMO #1 will be available for sale in July 2021 exclusively at local comic book shops (use comicshoplocator.com to find the nearest one) or at the BOOM! Studios webstore. Digital copies can be purchased from content providers, including comiXology, iBooks, Google Play, and Madefire.