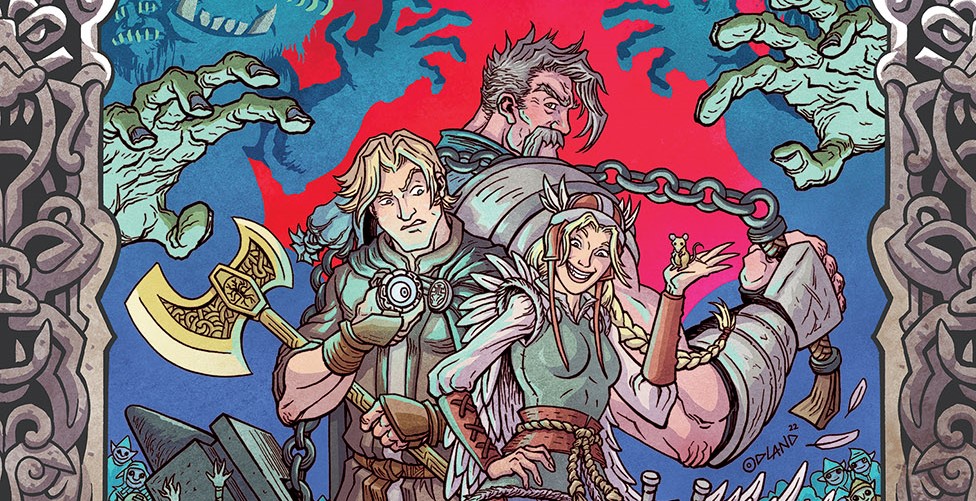 Image Comics announced a new four-issue limited series titled Beware of the Eye of Odin. The new series from Vinyl creator Doug Wagner with art by Tim Odland and colors by Michelle Madsen is set to bring monstrous mayhem from the Nordic realms that include Vikings, trolls, frost giants, and Valkyries this June.

Wagner talked about how the idea for the series was born, saying:

“I can’t wait for people to see this book. This whole thing started with Tim and I sitting at a Taco Bell trying to come up with something for he and I to work on together. He spouted out he’d like to do something with Vikings and monsters (Tim is actually descended from real-life Vikings by the way). I was like, ‘I’m in, but only if we get to put our own spin on all those Norse monsters, creatures, and especially dwarves. I want my crack at dwarves.’ We didn’t leave Taco Bell for four hours after that.”

“This was a lot of fun for me! It was the perfect opportunity to revel in the world of Norse Mythology and pay tribute to those Ray Harryhausen adventures that I love so much.”

Beware of the Eye of Odin is described by Image Comics as:

“Beware the Eye of Odin follows a Viking prince who, when he discovers the Eye of Odin, must embark on a harrowing quest to return it to its rightful owner—or face a death of boils and decay. By his side are a one-armed warrior past his prime and a female warrior convinced she’s a Valkyrie. Monstrous mayhem ensues.”

The press release notes that this series is tailored for those fans of epic fantasy such as The Witcher and Andrew MacLean‘s Head Lopper.

Beware of the Eye of Odin #1 will be available at your favorite local comic shop and digitally on June 22nd, 2022. Check out the short preview below: