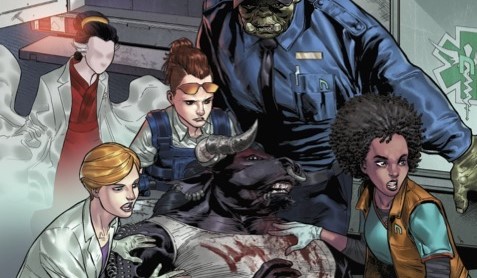 Dark Horse Comics has announced a new series that will follow the workings of a hospital for supernatural creatures titled, The Ward. The series comes from New York Times bestselling writer Cavan Scott and artist Andres Ponce in what Dark Horse describes as “an intense supernatural medical drama featuring an assortment of creatures and human pathos.”

Check out the official description from Dark Horse:

“St. Lilith’s is a secret hospital for supernatural creatures. The personnel are overworked and the facility is underfunded. It’s a place, and a life, Dr. Nat Reeves thought she left behind. Until a wounded woman with a tail appears on her doorstep. The Ward is a perfect read for fans of Supernatural, iZombie, and Grimm.”

Speaking of the series in the press release, Scott said:

“I’ve always been fascinated in ordinary people doing extraordinary things in the most incredible of situations, and that certainly describes the indomitable Nat Reeves as she plunges head first into a shift in the world’s only emergency room for supernatural entities. From murderous minotaur to gelatinous cubes with severe cases of food poisoning, no two patients are alike at St. Lilith’s.

However, as we know from shows like E.R. and Grey’s Anatomy, the biggest dramas come from the lives of the medical staff themselves and St. Lilith’s is no different. As Nat navigates everything from the troubled birth of a giantess’s baby to a growing plague among the preternatural patients, she must also balance her life as a mother with the professional jealousies she faces every day in her job. Can she keep her work at St. Lilith’s a secret while protecting those closest to her?”

Get ready to experience the mash-up of a medical drama with the epic scope of the supernatural when The Ward #1 arrives at your favorite local comic shop and digitally on June 8th, 2022. Check out the main cover for the first issue below: