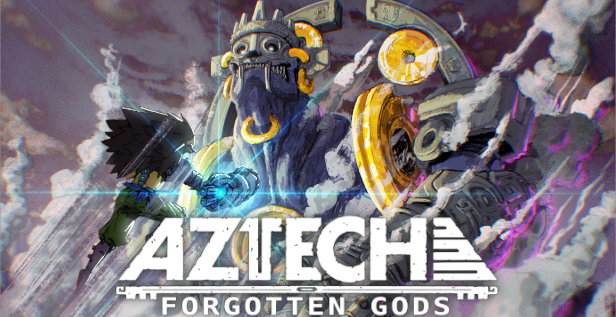 Aztech Forgotten Gods takes fans to an alternate timeline where we see what the Mesoamerican metropolis would have looked like in a technologically advanced design. The game is described by developer Lienzo as a:

“cyber-stone action-adventure,” Aztech’s memorable setting can be delightful to explore — that is, when the wonky camera and frustrating boss fights aren’t getting in the way.

Aztech Forgotten Gods is for the most part a very linear and short adventure. Taking under 10 hours to complete, the adventure follows Achtli, a young heroine who uncovers an ancient artifact. This immense stone arm replaces her prosthetic arm and allows Achtli to soar through the skies, but she also has played a part in awakening the ancient gods and they threaten to destroy the city of Tenochtitlán and everyone in it.

This is by far one of the biggest hiccups in the game as the story is fruitful and captivating, but fails to deliver with the lack of dialogue and instead is presented in text-only and repeated animations that take away from the experience.

Despite all that, it was difficult not to find myself attached to our leading character as the player becomes Achtli’s voice and perhaps that was Lienzo’s goal all along. As we meet the inhabitants of this world, we come across Tepo, Achtli’s best friend, or her mother Nantsin, the clever writing shortly had me caught in an internal voiceover taking on all the roles of these players.

This along with the game having an enjoyable story does give players the tools to make this story as captivating as they are willing to imagine themselves, but the lack of dialogues does underserve these characters.

There were many aspects of the game that set it apart, but none other than Achtli flying from one point to another as the mechanic set itself apart from other games and really gave it an enjoyable and signature feel. There is a learning curve, but once you are able to grasp the mechanics around it, you will find yourself soaring in just about every direction while taking advantage of the floating rings placed on the map and tactfully using your speed boost.

While you want and sometimes may be required to spend quite a bit of time in the air, something of note is the energy bar that you must keep an eye on and sometimes plan your flights and when heading for ground might be best.

It wouldn’t be an action-adventure game without combat, after all, we have a clobbering time-sized stone hand and it would be a shame to not put it to use. If you are looking for a detailed combat system, then unfortunately Aztech might not be for you as it feels most times that button-mashing is the one and the only route to be taken.

This isn’t a knock on the game as exploration and adventure are at the forefront and combat isn’t necessarily required to be the star. The special abilities do give the battles some range as you prepare a downward strike or a charged-up super-punch. The boss battles can be difficult and will sometimes consume you with the chaos you find yourself in, but with knowing when it is time to fight and when it is time for flight, you should have no issues taking on any of the bosses in the game.

Overall, Aztech Forgotten Gods will not be a high-end display of graphics and does require a bit of polish, but the inspiration behind the game, the characters they created, and the style it implements make for a more than enjoyable adventure into an alternate Mesoamerican time that includes all the charms of its world and history.

Achtli is a heroine you will want to cheer for and will leave some fans soaring, although some of the more aggravating aspects of the gameplay might bring some fans back down. It is a worthy entry and one that has all the tools to be built upon.