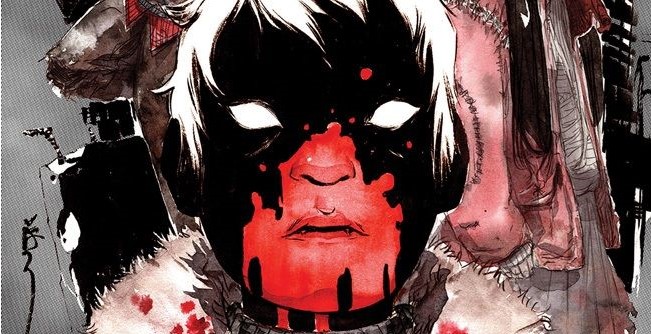 Jeff Lemire and Dustin Nguyen have reunited again for a tale of eternal childhood. The last remaining children on Earth and living among the remnants of humanity, at first glance, it seems that boredom is their worst enemy. Except for sunlight of course, but events that will shock the group are coming, and with it comes a journey paved by the creative minds behind Descender and Ascender.

I know that vampires much like the undead can be an oversaturated genre, but I truly enjoy every last bit of it. You have your run-of-the-mill classic looks on these creatures, but Little Monsters is anything but that. You give Lemire and Nguyen vampires and a dystopian setting and they will cook you up a recipe that hits on all cylinders with the two reflecting off each other to near perfection. This leads to a premiere issue that introduces the reader to Little Monsters with ease that only these two veterans can pull off.

The premiere issue leads to an introduction of the characters. These are a group of children who inhabit a post-apocalyptic world. How this came to seem to be one of the mysteries established already. These children also happen to be vampires, and boredom is one of their biggest problems, which bodes well for living in ruins. So we see these seemingly innocent children keep themselves occupied by playing capture the flag and feasting on rats, which seems to be the only other living things left in these ruins. In what seems to be an eternal routine, it gives us an interesting outlook on our characters who bear the resemblance of innocent children but have lived the span of many lives.

There is also the reference of “The Elder” who seemingly left and never returned. Was this an abandonment? Does his disappearance point towards life, maybe vampire hunters in other areas? Or could it be another threat that Lemire and Nguyen have waiting for us in the future? Truthfully, I feel we will see this Elder in the future, but having been missing for what would be an entire lifetime for some of us does raise the question of why hasn’t he returned, and if he does, what the heck was he doing this entire time?

Another point of praise is the way Lemire and Nguyen decided to keep the innocence within these vampiric children. Lemire outlines these characters with childish personalities and tendencies and Nguyen doubles up on that by giving them a look that is hauntingly innocent, yet their faces carry a weight that only someone who has lived as long as they have could possibly have. To me, this just shows the two creators’ understanding of one another, but it’s to no one’s surprise after the long stint and successful one that they had with Descender/Ascender. This is further felt with the ease that I was able to go through the issue. Everything was just so seamless.

In the short 26 pages, Lemire is able to give us a fleshed-out cast without the feeling of it being rushed and flawlessly introducing us to the entire line-up of characters and touching on their personalities and who they are with enough depth to feel like as a reader, I know them. To be able to pull that off and give us a premiere issue that is solely focused on the development and introduction of these characters is not an easy task, but Lemire has made a name for himself for a reason and he was more than up to the task. The questions raised throughout the issue are a hook that will certainly have readers thirsty for more, and as one of our main characters Billy goes looking for Romie as dawn is approaching, we find ourselves uncovering a shocking surprise.

Nguyen absolutely made jaws drop with his blend of black and white, only to throw in the occasional shot of color. The shadowing, the bold lines all feed into this lack of life, not only in our vampiric characters, but the world they inhabit. It’s truly masterful, and a joy to see what he is able to create.

Overall, this is a downright perfect opening to a series that is sure to shine in anyone’s pull box. The seamless introduction and path that Lemire and Nguyen send the reader on is something that is easily overlooked but takes a level of skill and collaboration that many creative duos can pull off. Lemire’s sharpness and Nguyen’s boldness have opened the door to a brilliant take on these immortal children and the desolate world they have inhabited for seemingly hundreds of years. The plot is compelling and the questions raised were not forced and has created an aura of mystery that leaves the reader wanting to explore more. Little Monsters #1 is a picture-perfect issue.