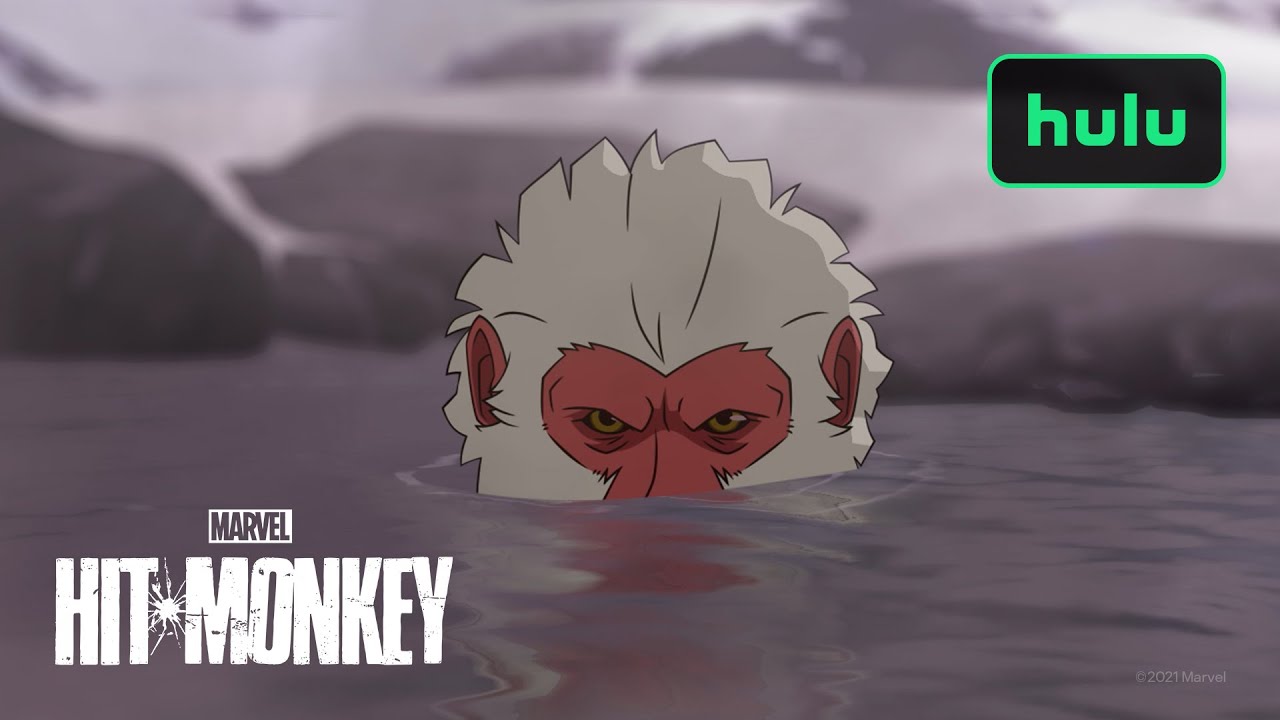 A trailer has been released for the Marvel and Hulu animated series Hit-Monkey. This is an adult-themed series that centers on Japanese snow monkey who learns martial arts and embarks on a a bloody-mission of revenge to annihilate those who killed his family.

In the series, “Monkey’s peaceful existence in the Japanese alps is shattered by the tragic loss of his tribe—setting him on a course of revenge and violence in the very world of humans that are responsible for his plight. He’s a killer of killers with a bit of a rage problem. Throughout the series, he must learn to navigate the struggle between his inherently sweet nature and the evil acts he must commit. It’s through his complicated friendship with the Ghost of Bryce (a former assassin and now, Monkey’s unwanted conscience), that will determine whether Monkey will be consumed by his rage or channel it for good. This is the story of Hit-Monkey.”

The series was created by Josh Gordon and Will Speck, who also serve as showrunners and executive producers. The two previously directed the 2007 ice skating comedy Blades of Glory and 2016’s Office Christmas Party.

The voice cast for the series includes:

Jason Sudeikis as Bryce, A world-weary Assassin who’s made some unbelievably poor life choices. He drowns his sorrows in work, travel, and gambling but when it comes to doing hits, there’s no one better. After he’s killed in the Japanese Alps, the ghost of Bryce and Monkey are tied together on a revenge quest. A terrible mentor with a sarcastic, cynical view of the world, Bryce must ultimately dig deep within himself in order to complete his final mission and help Monkey become who he was meant to be.

George Takei as Shinji, A lifelong public servant who has been the man behind the political career of Ken Takahara, his friend and political mentor. But when tragedy strikes, it falls to Shinji to pick up the baton and carry their political dreams forward. A good and honest man who raised his niece Akiko all by himself after the death of her parents. Shinji is the kind of politician everyone wishes they could have.

Olivia Munn as Akiko, Smart, ambitious, and powerful, Akiko is the niece of Shinji Yokohama the future Prime Minister of Japan. Having spent time in the west for College and Law School, she has returned with strong opinions about the future of her Uncle’s campaign. Her inherently good nature however masks a darker side, one that will emerge as the season progresses.

Ally Maki as Haruka, An honest cop from a small town in the north, Haruka comes to Tokyo with dreams of reforming a corrupt city. But can she hold on to her values in the face of so much vice? Her new partner Ito will test her sense of right and wrong and ultimately prove to be the mentor she has always looked for. But when it falls to her to complete their case, will she have what it takes to become the cop she has always felt she could be?

Nobi Nakanishi as Ito, The laughing stock of the Tokyo Police Department, and struggling with a drinking problem, Ito is the only one in Tokyo who suspects that Hit-Monkey may actually be one of the good guys. But no one, not even his new partner Haruka believes him. He will have to dig deep into his past and face his demons in order to finally restore his honor.

All 10 episodes of Hit-Monkey premiere on November 17, 2021, exclusively on Hulu.