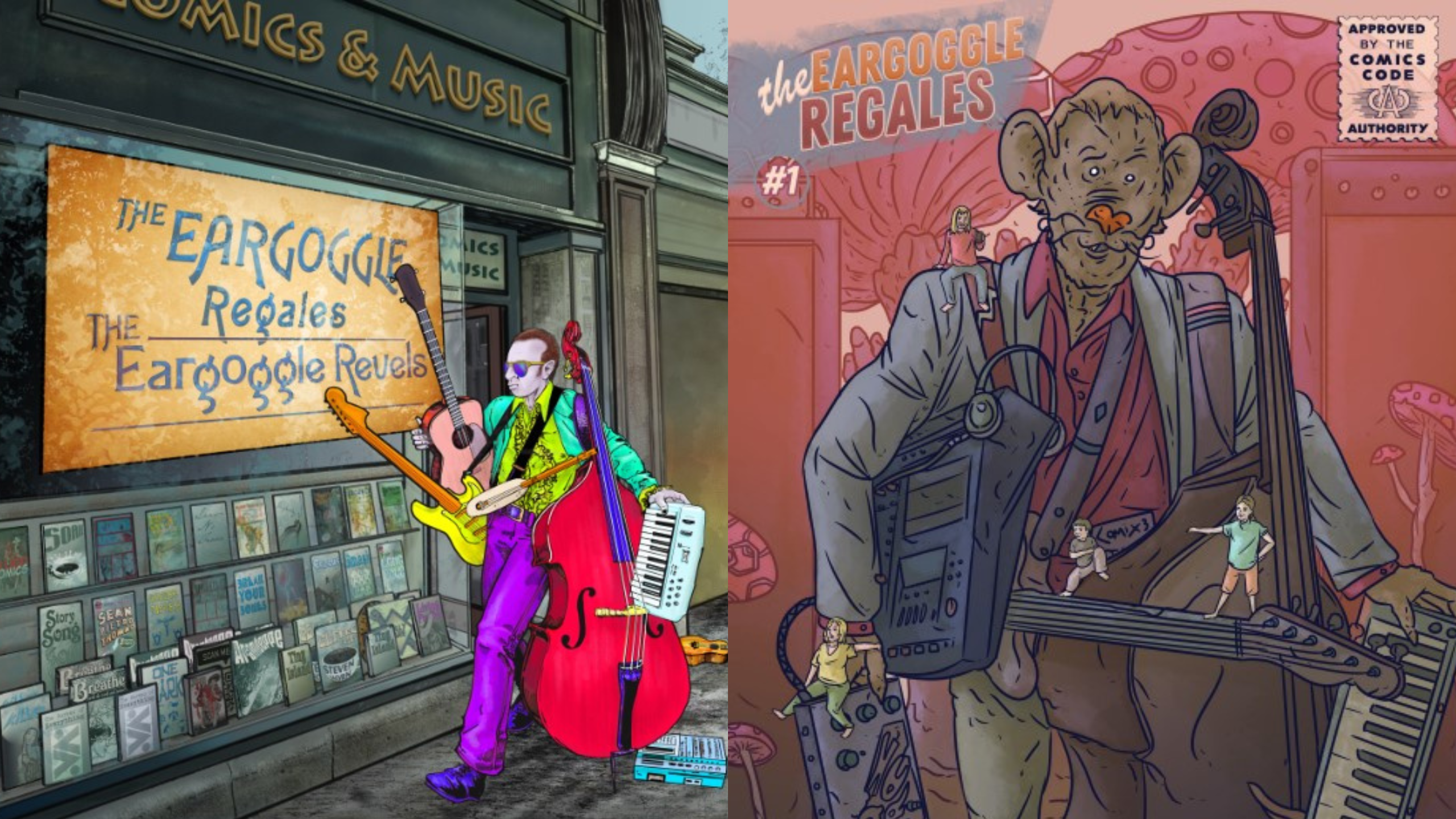 The Eargoggle Interview: Album or Comic Book, Why Can’t It Be Both???

The Eargoggle/Ezra Gale brought this project to life by first discovering that during pandemic-imposed isolation, much of their new songs were narrative-centered tales, and the self-professed “comic book nerd” in him saw this as an opportunity to see how these songs would transpire in comic book form.

Out of this comes the 56-page ‘flip book’ accompanied with record one “Regales” and record two “Revels” which gives readers a chance to enjoy the album with a comic literally two ways as the first record goes along with the comic being read from the front and the second record read from the back.

This big of a project is much too great to not share with other creative minds, so The Eargoggle enlisted the creative minds from all over the world including Argentinians Luis Santamarina and Alfredo Retamar, Moroccan Zi Hounti, Italian Flame Ghost, the UK’s Fiona Oakley, American Patrick Lugo, and many others. Then the comics were left to be interpreted by the artists with only the lyrics and a rough mix of the song as guidance.

Speaking with The Eargoggle we got a glimpse of the passion and creativity that fueled such a unique adventure, and with the interpretation of music and comics being so vast, it can almost guarantee that every person who experiences this project will go on a unique multi-dimensional adventure. Check out the Q&A below and listen to this and much more from The Eargoggle here.

GN: Thanks for taking the time to answer a few questions for Geek Network! Can you start by telling us a bit about yourself?

Gale: I have been in bands for more years than I care to admit, played all kinds of music all over the world, and I’ve also been a comic book geek since I was in high school passing copies of Claremont and Byrne’s  “X-Men” and the “Elfquest” books and others around with my friends.

Gale: It’s a double album with a comic book of all the songs and it’s a comic book with a double-album soundtrack. I’m not sure if it’s either or both- part of the point for me is I wanted to do something different and less passive than a normal album listening- or comic reading- experience, and combine these two things together so that people could choose how they experience it. So the comics are the lyrics of the songs, illustrated by each artist, but you could also read the comics and listen to the record as the soundtrack to those comics.

GN: How did this brainchild of yours come to be? What was the inspiration behind this multi-dimensional project?

Gale: Well partly, this thing happened in March of 2020 (you might remember it?), and I lost all my gigs, and was just hunkered down with my family with nowhere to really go and nobody to see or play music with or do any of the normal things I was doing living in Brooklyn at the time. So, long story short- I ended up writing a lot of songs, finishing a lot of songs, and then really sort of meditating on how best to present it and have it make sense as one project or one piece of art.

Most- maybe all-of the songs I ended up with seemed very narrative to me, there are a lot of characters, and a lot of stories, which isn’t always the way I write songs but somehow that’s what happened this time. So I knew I had to focus on that and bring out the lyrics somehow, so I started brainstorming ideas to have a fancy lyric sheet or something, and then it sort of just hit me, like- wait a minute! I love comics! Why not make these stories into comics?

I had never really thought of combining my love of music and comics before, they were always just separate, comics were even this sort of guilty pleasure I’ve always had, you know? But then I just went down this rabbit hole of figuring out how to do this, contacted a high school friend of mine who is a comic book writer- Colin Devonshire, he’s got a great zombie apocalypse series called ‘By the Time I Get to Dallas’- who put me in touch with some artists, who put me in touch with more artists, and the whole thing just snowballed.

Soon I was checking out all these artists’ work and looking for the ones that I really thought stood out as different, and then after a while, I started contacting artists and explaining the whole project and getting the whole process going.

GN: You have an ensemble of artists both in comics and music, what was the experience of working with so many different creative minds and styles?

Gale: Well, on the music side the pandemic definitely made it easier for me to contact people, in a weird way. I sort of felt like everybody was just sitting at home like I was, so I went about contacting people who I might normally have been intimidated by or just assumed they were too busy. But for the most part, I already knew all the musicians and singers on the album and that I was going to love whatever they did. On the artist side, it was very interesting because I hadn’t ever worked with comic book artists before.

I quickly discovered that comic book artists are not normally told, hey, just do what you want, be creative. They’re normally told, ok, panel 1, our hero is looking through the wall with his x-ray vision and he sees the bad guy, panel 2, he breaks the wall, etc. So for some of them, this was great, they could go crazy and be creative, and for others, it was more like, what do you want to have here? So we would bounce ideas around of where to go with each song and comic and then I would get these fantastical drawings back in my inbox.

GN: I understand each artist was sent lyrics and a rough mix of the song for them to interpret. How much creative freedom were they given with the interpretation of the anthology comic?

Gale: Pretty much 100%. My intention was to have the comic be a real anthology of different styles and looks in the same way that I think the record is musically of different styles and sounds. So I sent everyone the lyrics and whatever state the recording of the song was in- some of them got the finished version to work from, some of them got more of a demo- and said, here it is, draw this however you want.

But comic book artists are normally given a much more tightly prescribed script to draw from, so for most of the artists there was some degree of back and forth. I would explain what I was thinking of when I wrote the song, sometimes I would say maybe this image or that idea would work to illustrate it, but in every case I made a point of telling them, you can do whatever you want with this.

So some of them took that creativity and just ran with it- for example I love the comic Iida Silkoja did for the song “For Too Long,” it’s totally abstract, just an owl flying away, but somehow it fits the vibe of the song I think, and I didn’t tell her anything for that one. And then others were like the one Luis Santamarina did for “The Garden”, where I just said, I don’t know, I was feeling like I didn’t want to leave my house and I just wanted to shut myself in, and he came back with this fantastical story of this mole-person hiding in his Hobbit-hole, which was way better than anything I could have told him to do.

Or the comic Patrick Lugo did for “Killer,” where I just said, I think this is about a guy who falls for his robot, and then maybe the other way around too, and then he did this sci-fi masterpiece really that just took it to a whole other level. That was really what I was hoping for, to have the artists take this somewhere that I couldn’t even envision myself, and I think it happened pretty much every time.

GN: With such a vast interpretation of music, do you feel like each song can tell multiple stories?

Gale: Yeah absolutely, and that was part of the point I think. What I always loved about comics, right from when I first got into them as a teenager, was that there’s so much room for interpretation in these stories. I mean, you get the art and all the visuals, but there’s so much left to your imagination.

I mean, I had such a world of comics in my own head that I remember when I first saw those first ‘X-Men’ movies I was like, nah, they didn’t get it right, Professor X doesn’t sound like that, Wolverine doesn’t sound like that! Because I had such a strong image in my head already from reading the books! And I think good songs are like that too, we all have these different feelings and different emotional landscapes that are conjured for all of us from the same song.

So I wanted to experiment with having someone else- these incredible artists that I admire- interpreting my songs as stories in their own way, to see how that would end up. So yeah, I think you could make another comic out of these same songs, with the same process and different artists, and have it turn out completely different. Somebody fund that and let’s do it!

GN: Is there a specific genre that you gravitate towards when working on projects such as this?

Gale: I’ve played so many different kinds of music and I love so many different kinds of music- I had an Afrobeat band, Aphrodesia, that toured all over the world, I’ve played with rock bands, funk bands, made a living playing jazz for many years, had a reggae band, experimental bands, I have a country band now called Bourbon Sprawl- that when I started doing The Eargoggle a few years ago I really decided that it was going to be everything that I like in one place and I wasn’t going to choose a genre. And especially for something like this, where it’s with an anthology comic book, I really wanted the music to be its own kind of anthology too.

GN: Are there any future projects in the works?

Gale: Yes- the next project I’m working on is a rock opera called “Box of Tapes,” which is going to be a record with a graphic novel by two of the artists- Patrick Lugo and Olive Mitra- who are on this record. So it’s one story all the way through the music and graphic novel, and it’s about a teenager who finds a box of cassette tapes in his dad’s attic that begin to solve the mystery of his mom’s disappearance.

GN: Finally, thank you for sharing ‘The Eargoggle Regales, The Eargoggle Revel’ with us, it was a true one-of-a-kind experience. Any final words you would like to share with fans who get an opportunity to experience it?

Gale: Thanks for having me! I just hope everybody checks it out, and I always love hearing from people if they want to get in touch and tell me what they think of it.