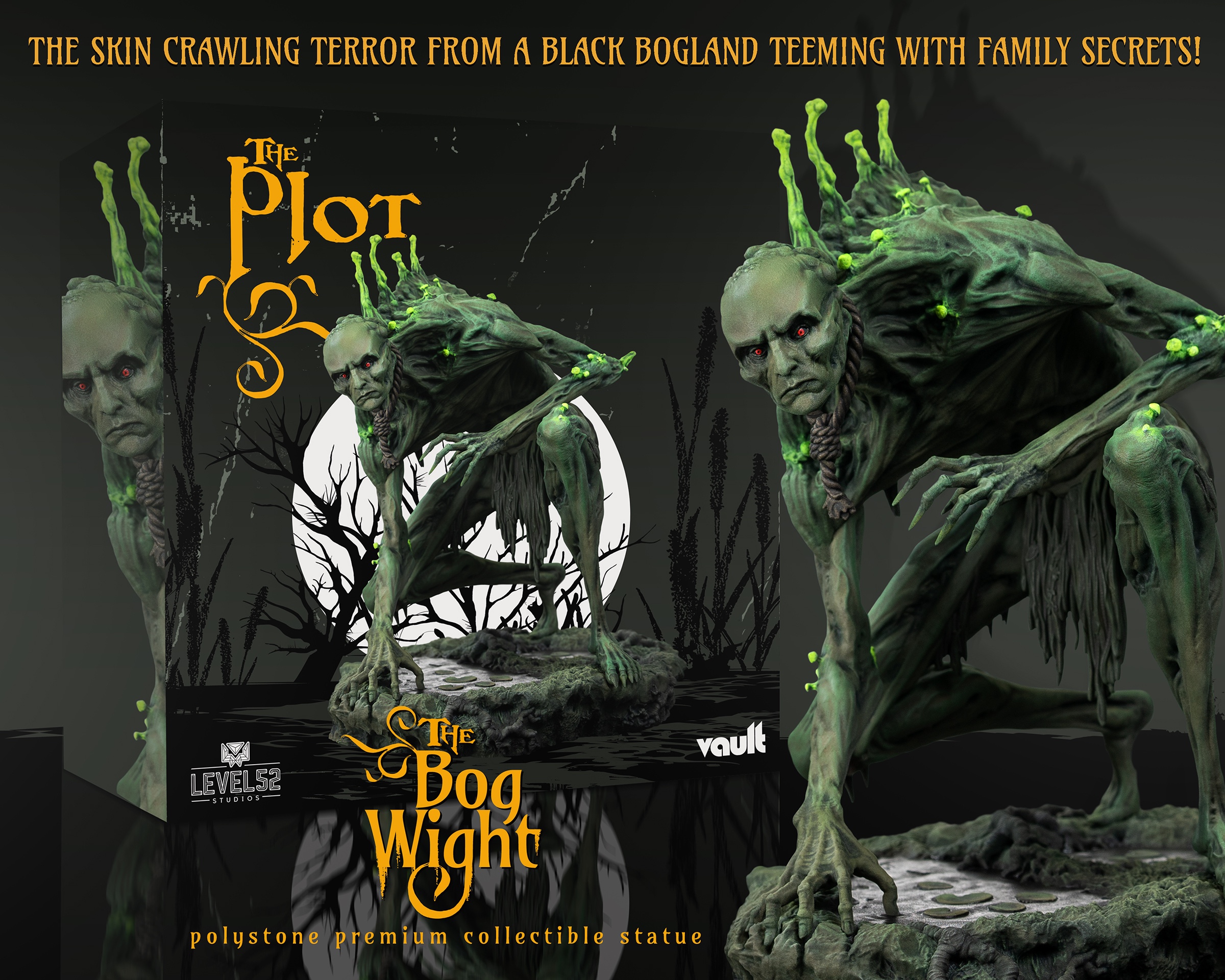 Vault Comics is extremely excited to announce they havepartnered with Level52 Studios to create a limited edition statue of the Bog Wight monster from Vault’s hit horror series, THE PLOT.

In order to receive…first you must give. From a deep, black bogland teeming with deadly family secrets comes the Bog Wight, the supernatural force of soul-sucking terror lurking at the murky heart of the hit horror comic THE PLOT by Tim Daniel, Michael Moreci and artist Joshua Hixson.

Inspired by artist Joshua Hixson’s designs, this terrifyingly faithful statue features a lithe and sinewy sculpt awash in the swamp-colored palette of the bog which spawned the monster. Punctuated by eye-piercing iridescent highlights, the Bog Wight eerily embodies the creeping dread that has burdened the Blaine family for generations and brings to life the gothic atmosphere of this iconic tale of horror.

“Joshua Hixson delivered an indelible creature design–and one that is worthy of lumbering right alongside horror’s classic monsters,” notes series co-writer Tim Daniel. “But Level 52 really raised the hair on the back of my neck with their faithfully realized and meticulously crafted statue. I can’t wait to place the Bog Wight right next to me on the desk and thoroughly soak in it’s eerie beauty!”

At 7.5” tall, this premium collectible is crafted fully of polystone and arrives in premium packaging. The statue can be preordered now on the Vault Comics webstore.

ABOUT THE PLOT:
In order to receive… First you must give. When Chase Blaine’s estranged brother and sister-in-law are murdered, he becomes guardian to McKenzie and Zach, the niece and nephew he hardly knows. Seeking stability for the children, Chase moves his newly formed family to his ancestral home in Cape Augusta… which overlooks a deep, black bogland teeming with family secrets.

THE PLOT is co-written by Tim Daniel & Michael Moreci, drawn by Joshua Hixson, colored by Kurt Michael Russell, lettered by Jim Campbell, and designed by Tim Daniel. THE PLOT Volume One is in stores now. Volume Two will hit store shelves on April 14th, 2021.

ABOUT LEVEL52 STUDIOS:
Level52 Studios is a workshop located in Seattle that specializes in the design and manufacturing of high-end toys and collectibles. Originally founded in 2015 by a few friends in a garage, Level52 has since grown into an industry leader known for its quality and independent philosophy that offers unique original, collaborative, and licensed collectible treasures to fans all across the pop-culture spectrum. With an ever expanding team of talented artists and creatives, Level52 creates just what it says on their door: Artistry for All.