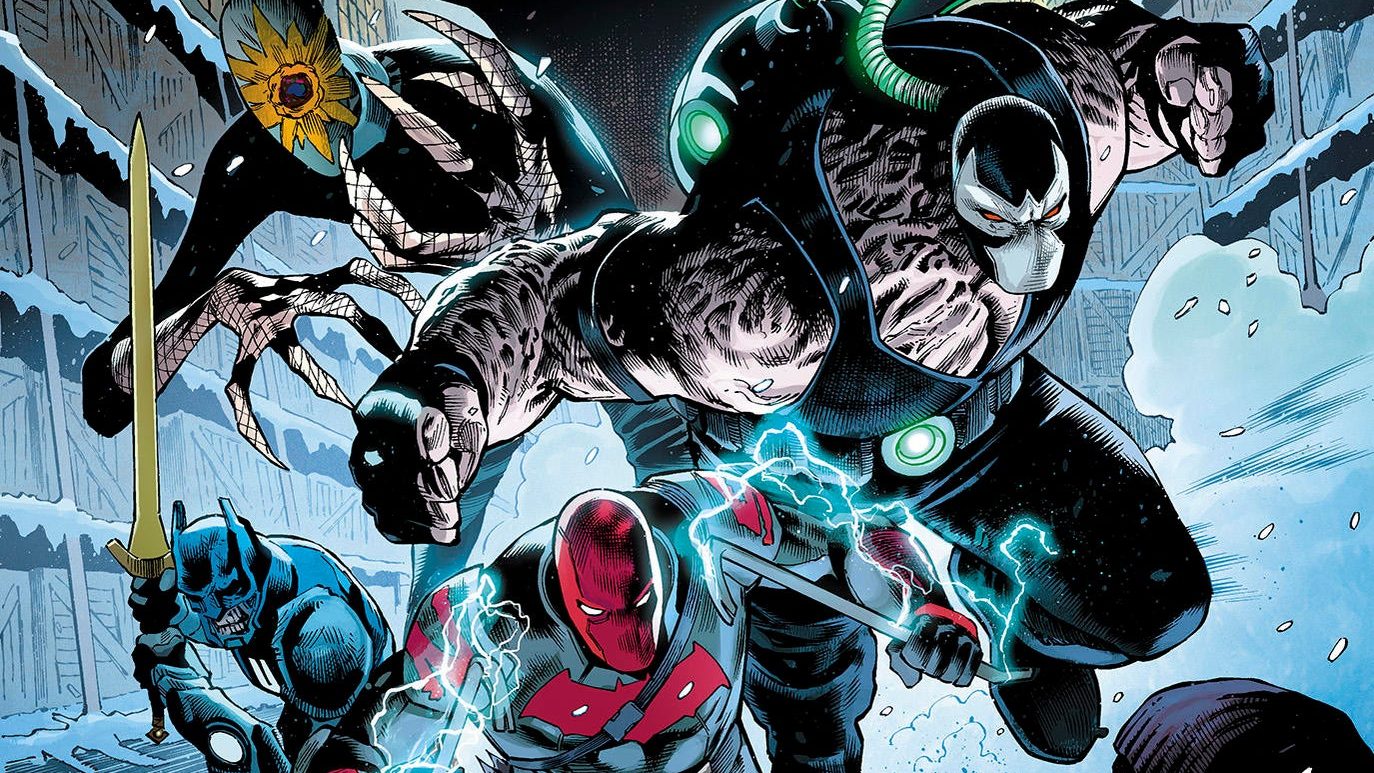 Task Force Z #1 brings us our favorite anti-hero Jason Todd/Red Hood into a world straight out of our nightmares. Reluctantly working with Project Halperin who has been resurrecting villains as undead ( did we learn nothing from DCeased!). The flesh-eating line-up includes Bane, Man-Bat, Arkham Knight, and other monsters as Red Hood leads his team as a snatch and grab squad tasked with bringing in escapees from Arkham Asylum. This might seem like either the perfect team or a recipe for complete disaster and at times it can be both. While Red Hood assumes the role of the leader (of course) he attempts to lead his group on these missions while keeping them from doing what the undead do, eating people.

The concept is fun and although we have seen it before, we have not seen it like this. Yes, we saw Red Hood in DCeased: Unkillables, but this concept takes what DC has found success in and tweaks it into its own identity. From the first panel, Jason Todd shines as the badass, outspoken character we love and we get tons of intense, high-octane action. Just as the action, the story progresses rather quickly keeping the reader on their toes as they try to keep up with the madness going on. Rosenberg gives us an opening showing the team in action and their downfalls as we see both Bane and Man-Bat nearly tear their target to shreds which doesn’t land well with Jason Todd. This gives us an idea of what we will be in for and that’s the only hook Rosenberg and the team needed to keep us invested for the remainder of the issue.

There is almost a comedic aspect to how these missions play out. These are undead villains led by Red Hood who can be charming, but is not someone to be messed with and yet, somehow they amusingly hit speed bumps as they try to do someone’s dirty work. It’s almost like seeing the growing pains of a new team, except for the most part, Todd is the only brains in the group… mostly. Although Man-Bat and Bane are staples in the Batman universe, some other characters might fall short on some readers’ knowledge, and that is perfectly fine as the DC Universe, let alone the Batman Universe is vast and finding an entry point that will fall perfectly with all new readers is tricky. Even with that, the plot, and comic itself are something that can be enjoyed by current and new readers.

Red Hood is my guy, and teaming him up with the undead is in a way a perfect marriage. He may not be a flesh-eating zombie, but anyone familiar with Red Hood knows that he can be just as violent and his brutality is what will either make you love him or hate him and although his morality may not line up with yours, the great thing about him is that he does have his own code he lives by, which includes not killing civilians, so the struggle for Red Hood to keep his new group of zombies from needlessly killing or harming is a bit of a trigger for him and creates conflict.

One thing I did not see coming was just how astounding the art would be. I expected it to be good, but I was absolutely floored at how real, brutal, and exhilarating these panels were. Barrows and Ferreira really jumped on this as a two-headed hive mind and superbly captured the essence of these undead villains and the balancing act of the pencils and colors was sublime. Without completely transforming these characters they play with their characteristics in a way that shows how horrifying they could be without losing the identity of the iconic characters. The action panels are something beautifully choreographed as if you were watching them on screen.

Overall, DC does a great fan service with another brilliant villain team-up with a horrifying twist. As mentioned before, we have had a ton of undead stories told, and that includes on the DC front, but to manage to give us a fresh take and compelling narrative on an oversaturated genre just further impresses and is perfect for the Halloween season. With the all-star lineup led by Red Hood and the mysterious forces pulling the strings, this title is a must for those die-hard Batman Universe fans and those looking for an unusual, yet refreshing take on comic book horror.