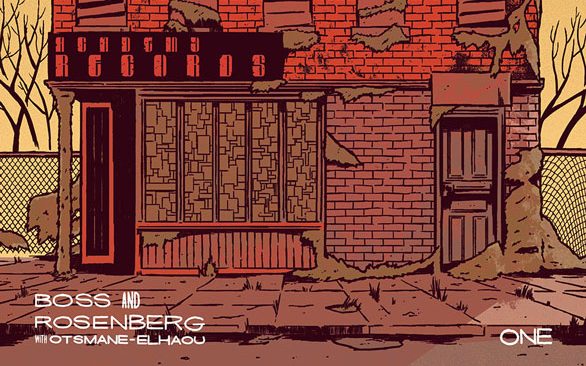 MATTHEW ROSENBERG and TYLER BOSS REUNITE FOR WHAT’S THE FURTHEST PLACE FROM HERE?: A POST-APOCALYPTIC COMING-OF-AGE STORY WITH A SOUNDTRACK THIS NOVEMBER FROM IMAGE COMICS

The Marvel and DC Scribe and ‘Dead Dog’s Bite’ Creator Introduce a Post-Apocalyptic World Where Your Records Are as Important As Your Survival, With Each Issue Accompanied by An Exclusive Vinyl Single

The team behind the breakout hit series 4 Kids Walk into a Bank, reunite with a brand new series destined to be every bit the critical darling as its predecessor: What’s the Furthest Place From Here? This all-new series sees this creative duo move to Image Comics and follows up the tease of something new from the team at the publisher’s Image Expo.

Matthew Rosenberg said, “We knew whatever we did after 4 Kids would have to be something ambitious and crazy, but we also needed it to feel like something that only Tyler and I could make. I feel like we really accomplished all of that here.”

The world has ended. Now all that remains are gangs of children living among the ruins. But Sid believes there must be something more out there. When she disappears into the wastelands her gang will risk everything to bring her home. A story about the things that matter most- Your survival, your loved ones, and your record collection.

Artist and co-creator Tyler Boss continued, “Matt and I really wanted to get outside of our comfort zone with this book and build it in a new and (hopefully) exciting way. Part of that was being unafraid to try something different and the other part was having a partner in Image who believed in us. Couldn’t be happier to have our weird little big book’s home be with Image.”

What’s the Furthest Place From Here? is an all-new series kicking off with a triple-sized first issue this November. There will also be a ‘deluxe’ version that comes with an exclusive vinyl single featuring all-new music from Blake Schwarzenbach of Jawbreaker and Jets to Brazil, and Joyce Manor. These singles will be pressed in limited quantities, with comic shops to be the exclusive source for securing a copy, and each subsequent issue will also have a deluxe option with a new and exclusive accompanying single, with the lineup to be announced alongside the preorder window.

The first issue is solicited in the September dated Diamond PREVIEWS catalog and will be priced at $4.99 for one four special variant covers, and $14.99 with an exclusive cover and the accompanying vinyl single. Reserve your copy with your favorite local comic shop today, and follow creators Matthew Rosenberg and Tyler Boss, along with Image Comics for upcoming announcements around special covers and artists contributing to the soundtrack!

For more information, and further updates visit https://imagecomics.com and https://furthestplace.com.