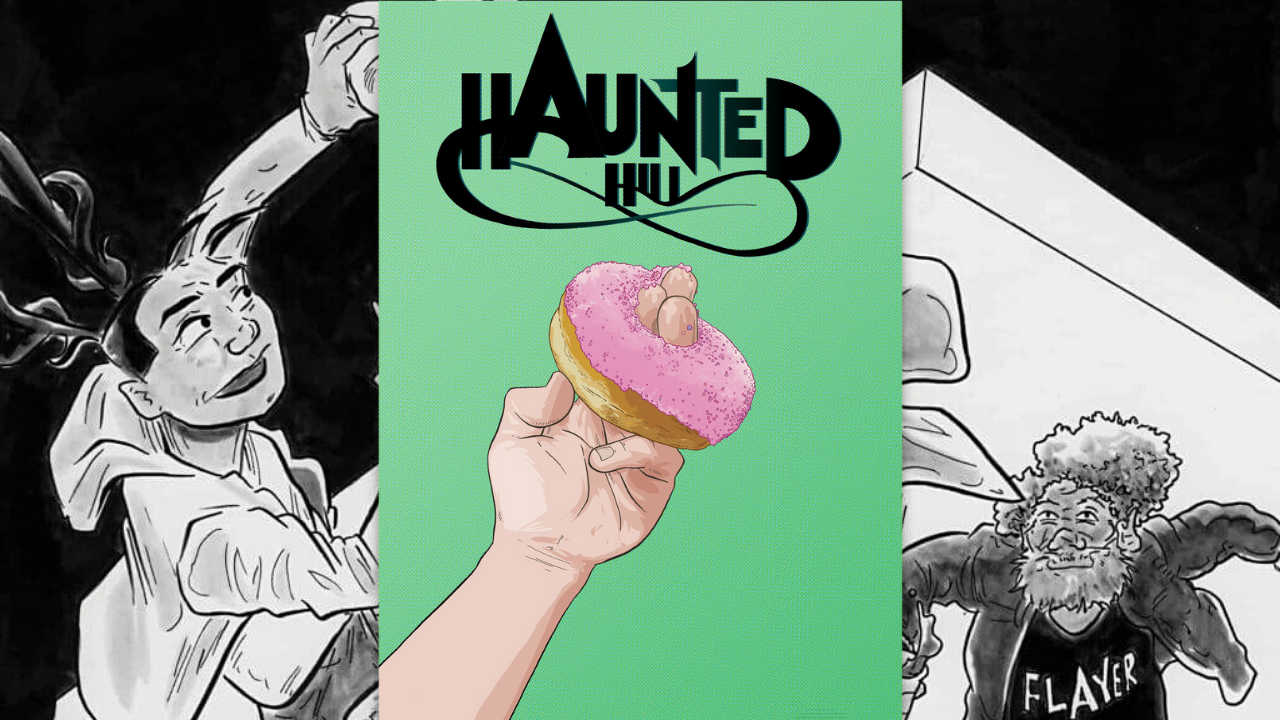 Acclaimed writer and artist Richard Fairgray has launched a new digital comic series titled Haunted Hill. The series is available through his website and follows Eva, whose wife just got a job opportunity she could not shy away from and has landed them in Haunted Hill. Now in the lowest part of Hollywood with “hill” status, Eva tries to find her place while circling the drain of functional life in this new slice-of-life series that is hilariously relatable.

We had the opportunity to ask creator Richard Fairgray a few questions regarding the series, Check the Q&A below along with a few preview images and be sure to visit Richard’s website to check out all his work and catch up on the weekly series Haunted Hill that released on January 20th, 2022.

Thanks for taking the time to speak with us. Can you start by telling us a bit about yourself?

I’m the only Richard Fairgray in the world, so good or bad the search results will be about me. I’m almost completely blind and I draw pictures for a living, mostly because it gives me a way to interpret the world on my own terms. I’m a workaholic and my brain doesn’t shut off ever so I just have to point the energy at paper and hope for the best. I live in Hollywood in what used to be the first-ever mall.

I like to think of myself as a big gay dirtbag and I love hotdogs if they don’t have ketchup on them. I’ve spent the last several years working on YA and kids books while making books for grown-ups in my spare time and now I’m finally starting to release them.

Can you talk to us about your creative process? Was there anything different about “Haunted Hill” that differs from your previous projects?

Haunted Hill started as a way to occupy myself while waiting on other people. The more successful you get in any field, the more oversight there is. I was longing for the days when I could just write something and draw it right away. I had 2 days off and decided to just go for it. I did the first six pages without stopping but then the notes I was waiting on for the other project didn’t come through. 4 days later I had the first issue.

Now I just make an issue every time someone is late getting back to me. It’s also a book where I don’t do anything I don’t enjoy, so the coloring is done by hand. I don’t alter anything digitally. Every page is finished when it’s finished and it’s about Hollywood so I get to draw all my favorite terrible places.

How was the idea of “Haunted Hill” born?

The idea for Haunted Hill was a mash-up of a few things I’d had rattling around. It always annoyed me that the film House on Haunted Hill was actually about a haunted house on a regular hill. I started thinking about how a hill could get haunted and what it would do. I figure a bunch of ghosts underground would jack up the energy of a place and make it just a bit off, kind of like Hollywood.

Then I threw in Eva, a character I’d been formulating for a few months who is both insufferable and always right, delightful and sloppy and someone who I just hadn’t ever seen in anything else. From there it was a matter of fictionalizing (slightly) some of my own dumb adventures and I had this whole soap opera on my hands.

What about Hollywood’s Haunted Hill intrigued you to make this the setting of your story?

I grew up in New Zealand, and even the biggest city feels like a small town. Everywhere is sort of safe until you see one other person. Hollywood is the opposite. Everything here is sort of dangerous but there are so many people that you’re always pretty safe. If there’s one maniac on the loose you’re in trouble, but if there’s a huge group they all distract each other and you can just get on with your day. That’s why I was so scared of Natalie Merchant when she went solo.

The one constant among every creator we speak to is just how much they love comics and they love making them, what about making comics do you, love?

Making comics is like playing god. You make a world from whole cloth and it becomes real. The thing that makes that different from TV or prose is that with comics you can control time. I can MAKE you take longer reading a page by putting in more detail or smaller panels. I can slow down or speed up anything I want for impact if I’m good at my job. That’s fun.

Is there a particular book or project that really stands out to you, Whether yours or another creator?

In terms of my books, I know a book is good when I can become obsessed with it. When a project consumes me completely I know I’m onto something special. Right now it’s Haunted Hill. I’m dreaming about the characters. I have so many tiny moments planned and dumb jokes floating around in my head. SO much weird stuff.

Also, getting to walk around in the real-world version of it makes my whole life feel like an adult Disneyland trip. I want to do a different thing every week for the rest of my life, so maybe at some point Haunted Hill will get replaced (I have 4 other graphic novels I’m signed on for) but right now it’s everything to me.

What can readers expect from Haunted Hill?

Straight up: a critique of straight male culture and ‘loyalty’ in friendship as a cover for shitty behavior to women. There’s also going to be aliens and ghosts and a backstory involving the mob and a woman who can fly and a pizza that might end the world and a serial killer and hotdogs and a Scott Stapp-themed Sushi restaurant. The wonder of telling a story that essentially plays out in real-time is that it can kind of have everything. It’s big dumb kid logic with ground human emotion.

So what’s next? Anything in the works or planned for the future?

I have 4 other titles out this year. Ghost Ghost is a comic I started when I was 7 that was my second highest selling book ever back in New Zealand. It’s coming out from Stacked Deck Press in June and it’s about a ghost who struggles with invisibility and loneliness.

The third book in the Black Sand Beach series and the second book in the Cardboardia series hit in June and August respectively (paper crisis allowing). Blue Fox in Scotland is putting out my book SHED, which is about sea monsters and small-town bigotry and not looking for a happy ending too early – I think that’s launching in July but I’m just finishing the final chapter cover today. I have 2 shorts in Nightmare Theater 2 which will be at every LA creators table at every con all year. I think that’s all.

Stay tuned for Haunted Hill in print as soon as I figure out how and where.

Lastly, anything you would like to share with readers, and do you have any recent book recommendations for us and the readers?

Everyone should read The Alcoholic by Jonathan Ames because it’s the best comic memoir I’ve ever seen.

Since I’ve so far been sent three hotdogs in the mail this year by different readers I guess I’d just like to ask people to, A) not put ketchup on them, and B) put them in a Ziploc bag before you put them in an envelope. It’s likely I will eat them because I’m basically human garbage, but I’d like my hands to not get so sticky when I have drawing to do.

Thank you, Richard, we hope you enjoy the hot dogs!

The Wolf Among Us 2 Will Welcome New Players