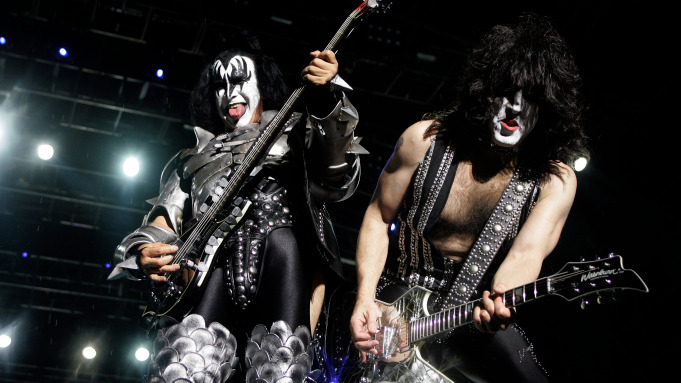 Netflix is near a deal for for a film package including a biopic titled, Shout It Out Loud,

According to sources, Netflix is tying up a deal after a bidding battle for a film that will be directed by Joachim Rønning.  A script is being written by Ole Sanders. the film will be a co-production of Mark Canton’s Atmosphere Entertainment and Universal Music Group.

Shout It Out Loud will have close cooperation from bandleaders Gene Simmons and Paul Stanley. The band’s concert arena anthems will be a big part of this, but the film will focus on,

” that duo going back to when they were two misfit kids from Queens who formed an unlikely friendship, starting KISS after enlisting guitarist Ace Frehley and drummer Peter Criss. Trying to set themselves apart from the ‘hair’ bands of the day, they accented their power chords and pyrotechnics with makeup. At heart, their formative story is in the vein of The Commitments, if that Irish soul band employed makeup and spiked heels.”

“I remember walking out onto the street, seeing this Spanish girl jumping rope across the street, and staring at her long black hair slapping against this great butt,” he once said. “It occurred to me this was better than religion. How could I get near that?”

“I was deaf in one ear, and had a slight deformity that made me look different,” Stanley said. “I was this short fat kid, and music became my salvation, a place to hide and dream. And when I played music, there were always girls around.”

Though their musical motives matched, Simmons and Stanley didn’t instantly mesh when they met.

“Gene felt he, Lennon, and McCartney were the only ones who wrote music,” Stanley once said. “I played him a song that ended up on our first album, and he played three for me, one about soup.” Combining Simmons’ passion for comics with the ’70s Gotham glitter rock craze, they hit the makeup mirror with a specific goal: “Become the Beatles on steroids.”

“All the glitter-rock bands had wrists as thin as their girlfriends did, and here we looked like linebackers who had raided their girlfriends’ closets,” Stanley said. At an early downtown date, they heard snickers from their glam counterparts “until we plugged in and played, and then everyone’s mouths hung open,”