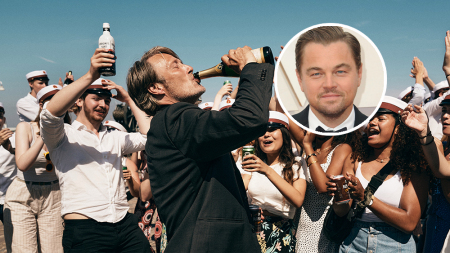 Leonardo DiCaprio is in talks to star in Best International Film Oscar winner ‘Another Round,’ starring Mads Mikkelsen.

“Another Round” centers on four friends who consume booze on a daily basis to test a theory that maintaining a certain blood alcohol content level inspires creativity and affects their daily lives.”

Thomas Vinterberg, who landed a surprise Oscar nomination for directing the Danish film, will executive produce the remake, along with Sisse Graum Jørgensen and Kasper Dissing. Vinterberg also co-wrote Another Round with Tobias Lindholm, but Lindholm will not be involved with the remake.

During the Oscar ceremony, Vinterberg paid tribute to his 19-year-old daughter, who lost her life as filming began on Another Round, which she had a role in. Venterberg said:

“We wanted to make a film that celebrates life,”

“We ended up making this movie for her, it’s her monument.” He added, “You’re part of this miracle. Maybe you’ve been pulling some strings somewhere.”