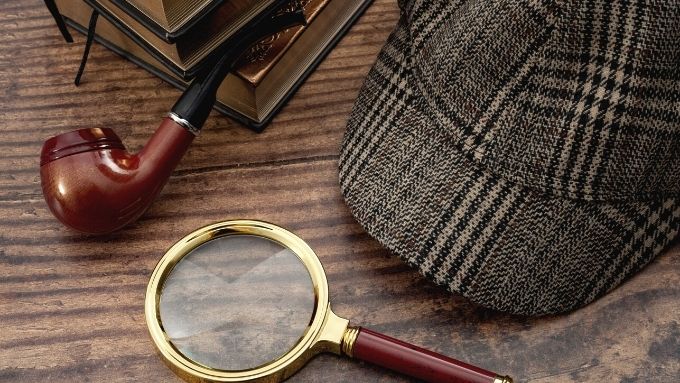 Mason Cooley once said, “Clothes make a statement. Costumes tell a story.” When you think of some of the most iconic costumes in film— from the Joker’s purple suit in The Dark Knight to Black Mamba’s yellow tracksuit in Kill Bill—it’s easy to see what he meant. And often, it takes only one part of the costume to tell a story. This is especially true if the costume includes a hat. These are some of the most iconic hats in film history.

Few images are more entangled with the early days of silent film than that of Charlie Chaplin’s character “the Tramp.” The character appeared in 65 different short and feature-length films from 1914 to 1940, including the 1915 film for which he is named. The Tramp’s outfit—a too-large pair of pants, a too-tight jacket, a toothbrush mustache, and a small black bowler—is a mess of contradictions, communicating the fact that the Tramp has seen better days. This is one of the things that made the public laugh—but also that endeared him to audiences.

Sherlock Holmes’s Deerstalker, The Hound of the Baskervilles (1939)

The deerstalker hat was originally designed to be worn by hunters. These days, however, we associate it more with stalking criminals than stalking deer. That’s in part thanks to English illustrator Sidney Paget’s 1891 drawing of literature’s most famous detective, Sherlock Holmes. In the 250 different films featuring Sherlock Holmes, there have been more than a few portrayals of Mr. Holmes in a deerstalker. But as far as iconic hats of film history go, you can’t go wrong with Basil Rathbone’s chapeau in The Hound of the Baskervilles.

The fedora’s origins go back to the stage in 1882. And in the 99 years following, it was no stranger to the silver screen, gracing the heads of heartthrobs such as Rick Blaine in Casablanca to gritty detectives such as Sam Spade in The Maltese Falcon. But eventually, someone other than Humphrey Bogart would get a chance to wear the iconic fedora on screen, and that person was Harrison Ford. Before Indiana Jones, there was a certain air of suavity about the fedora, but Raiders of the Lost Ark transformed it into the headwear of choice for an action hero.

The Sorting Hat, Harry Potter and the Sorcerer’s Stone (2001)

We’ll admit it: this isn’t a hat we’d add to our wardrobe. Even so, if you were born anytime within the last 30 or 40 years, you’ve probably dreamed of putting this hat on your head. In the Harry Potter book series, the Sorting Hat is the only hat that can perform legilimency, the magical art of reading someone’s mind. It uses this skill to sort new students at the Hogwarts School of Witchcraft and Wizardry into one of the school’s four houses: Gryffindor, Ravenclaw, Hufflepuff, and Slytherin. It’s also the only hat that can speak, meaning it’s the only hat that also has an actor credit: Leslie Phillips.