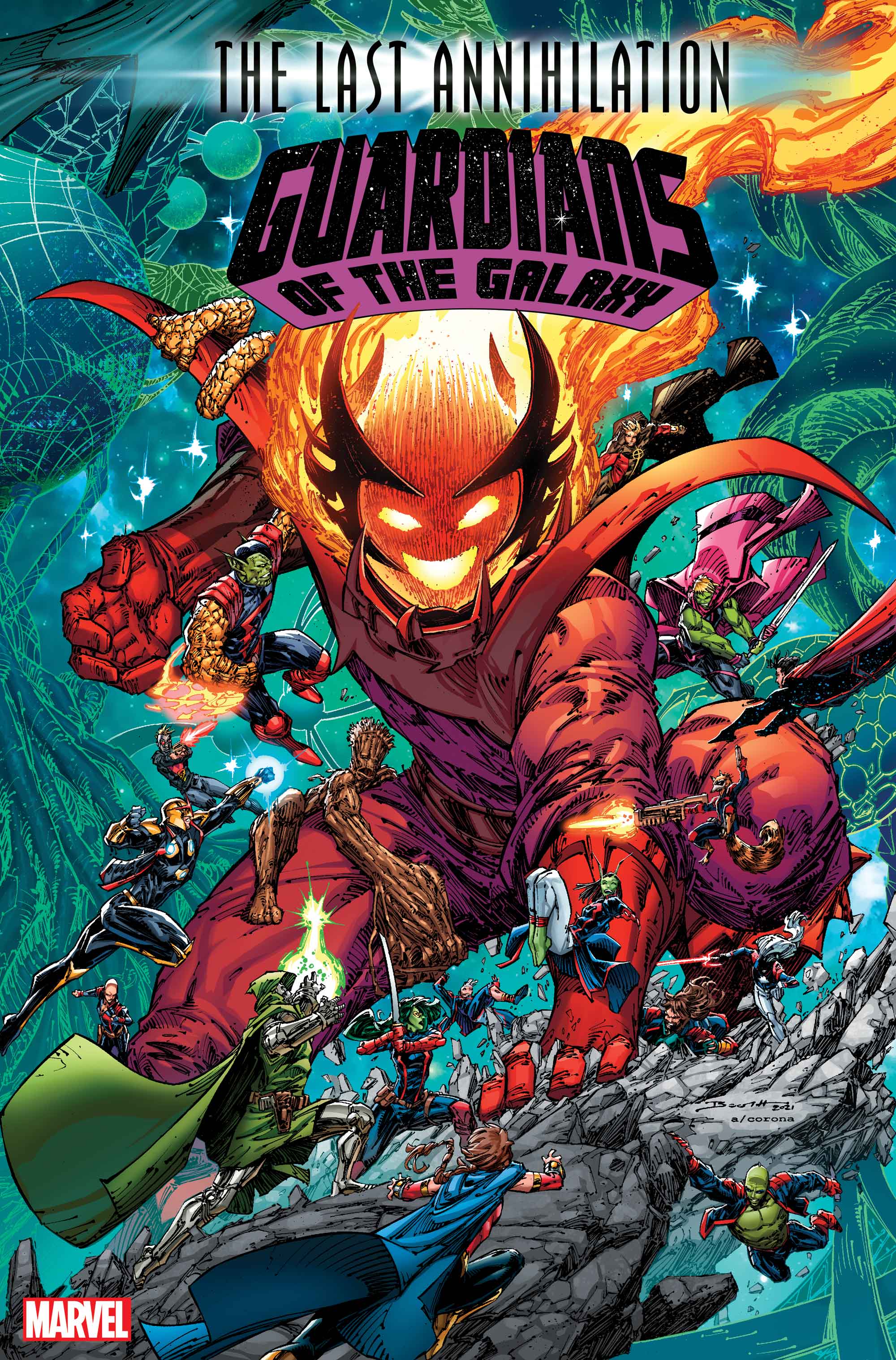 THE LAST ANNIHILATION: The galaxy-spanning Marvel crossover begins on July 21st in GUARDIANS OF THE GALAXY #16!

In yesterday’s action-packed GUARDIANS OF THE GALAXY #15, fans finally learned that the dark threat behind the upcoming cosmic crossover THE LAST ANNIHILATION is none other than Dormammu, Lord of the Dark Dimension! The dreaded Doctor Strange adversary has merged with Ego the Living Planet and plans to use his powerful magical abilities to conquer space, forcing the galaxy to unite like never before. The saga will kick off on July 21st in GUARDIANS OF THE GALAXY #16 where Dormammu’s endless army of Mindless Ones will put the new lineup of Guardians to the test. The crossover will continue in Ewing’s space-based X-Men title S.W.O.R.D. in an issue that will see Storm face one of her first challenges as the newly appointed Queen of Sol.

THE LAST ANNIHILATION will also spin out into a series of one-shots, each focusing on a different corner of the galaxy as Dormammu unleashes his evil across space. Ewing will team up with artist Bob Quinn (Way of X) in CABLE: RELOADED #1, featuring the highly-anticipated return of classic Cable who will lead a band of mutants on a mission to retrieve a dangerous weapon that’s deeply rooted in X-Men history. When Black Panther enlists the help of the Intergalactic Empire of Wakanda in the war against Dormammu, a new hero rises in THE LAST ANNIHILATION: WAKANDA by writer Evan Narcisse (Rise of the Black Panther) and artist Germán Peralta (King in Black: Black Panther). And writer Anthony Oliveira (Lords of Empyre: Emperor Hulkling) and artist Jan Bazaldua (Star Wars, X-Force) will deliver another chapter in the saga of Marvel’s beloved power couple in THE LAST ANNIHILATION: WICCAN & HULKLING, showcasing the might of the newlywed super heroes as they’re forced to split up to defend planets against Dormammu’s overwhelming forces.

“We wanted to pit our space heroes against an unexpected big bad – and I don’t believe anyone guessed Dormammu, so mission accomplished,” Ewing said. “With a possessed Ego the Living Planet in his grip, he’s even more horrifically powerful that you remember, and he’s got a new magical plan to take our entire reality for his own – one that might surprise you all over again.”

This is what the new Guardians were built to do. But will it be too much? The war to end all wars begins. And not everyone’s going to come home. Check out the fully revealed cover of GUARDIANS OF THE GALAXY #16 below along with never-before-seen artwork and a LAST ANNIHILATION checklist. And be there for the start of the latest Marvel space epic when THE LAST ANNIHILATION begins on July 21st! For more information, visit Marvel.com.

SPIDER-MAN BEYOND: Marvel Teases the Death of Spider-Man