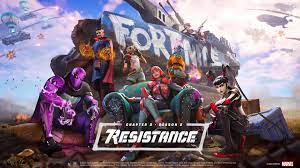 Epic Games revealed the new Fortnite changes that dropped yesterday when Chapter 3 Season 2 launched. Players who enjoy the Marvel crossovers are in for a treat as Doctor Strange and Prowler join the mix and Iron Man will be making his grand return after a hiatus.

The new season will run into the summer and Epic Games also announced that all proceeds earned from March 30th to April 3rd will be donated to humanitarian relief to the people affected by the war in Ukraine. Epic Games followed that up by noting that Xbox “is joining us in this effort and is committing their net proceeds for Fortnite during this time, so that we can get more aid to the people of Ukraine.” Check out more about their support for the people of Ukraine in their post here.

The new season continues the ongoing battle for Zero Point, and this time around some gameplay changes have hit Fortnite with new abilities and gadgets available. Player movement has seen a boost with an additional speed burst that can be triggered with a new sprint move. Players can also now grab onto ledges to pull themselves up meaning that building is not the answer to all your problems anymore. Also, building is not currently available in-game. It will most likely not be permanent and is part of the plotline which you can see in the trailer below, but for the time being, the dynamics of how the game is played has been drastically altered without the ability to build.

Along with Doctor Strange and Prowler becoming available this season, Epic Games has also added new vehicles to the island. An IO Titan Tank and Battle Bus can be used, but the Battle Bus is currently locked behind a community donation center that will leave players tasked with unlocking it. The Battle Bus will feature a cowcatcher, chonkers tires, and two different turrets.

Epic Games wasn’t very vocal about the upcoming season and did not offer players a finale event, but it seems this season was more tailored towards giving players new gameplay mechanics over the usual fireworks display we have come to expect. Check out the trailer below: