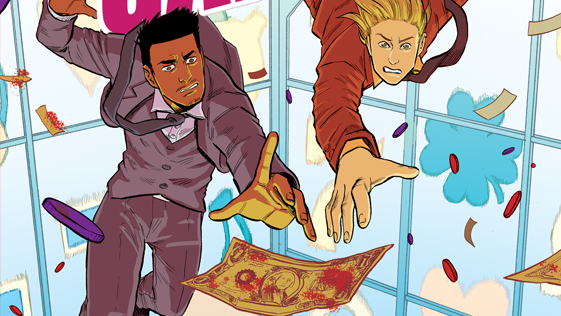 Play Your Cards Right and Pick Up FINAL GAMBLE From Band of Bards Comics.

Final Gamble is a new project trying to find life on Kickstarter. This project coming out of Band of Bards Comics, an indie publisher hailing out of New York, that has set a focus on giving readers stories that give representation, inclusion, and diversity. An admirable goal for an indie publisher trying to cement itself in the wonderful world of comics.

Together, they have banded to, “present a dark social commentary about the grip of predatory society with… FINAL GAMBLE; The Inaugural Project from independent publisher Band of Bards. Blending horror, psychological thrillers, and tabletop gaming genres FINAL GAMBLE explores the corruption of wealth, the horrors of humanity, and the strength of solidarity.

This 24-page issue follows the misfortunes of gambling addict Danny Lin, and disgraced MMA fighter Jasmeet Khanna who have both fallen on hard times. Owing an enormous amount of money to a loan shark named Mandy, they are offered the chance to save themselves by winning the money they need in a game of poker against her. Unable to work together, the two men are easily defeated.

As a result of their defeat, the two become prisoners of The Mercury Society, a group composed of the richest and most powerful people in the world.

In this unforgiving Hell, people are forced to fight to the death in an elite gamble for their souls.”

“When I was writing Final Gamble, I had Jorge’s art specifically in mind, and actually getting him to draw the book was a dream come true,” said Bobby Singer. “Working with him has been both an honor and a pleasure. Band of Bards believed in me and my story when other publishers wouldn’t and for that, I’ll always be grateful. Tim Stolinski and Chris Benamati are great guys to work with, and I’m so glad they’re taking a chance on me and my funky gambling comic!”

“This was a really fun and interesting project to take on,” said Jorge Santiago Jr. “It’s been a great challenge to convey stress and tension in these situations where the doom is far more terrifying than the current moment. As a fan of gambling stories, I think this will be a great story for people who enjoy watching characters walk the tightrope of success and failure!”

Final Gamble’s Kickstarter expires September 3rd, so be sure to go all-in now and get yourself an amazing book, from amazing people with an amazing indie comic publisher trying to shake things up in comics. Haven’t convinced you yet? Take a look at the preview pages, trailer, and rewards available to backers, and come out feeling ACES!